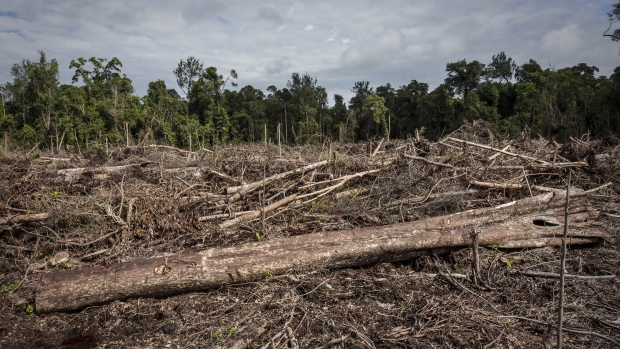 TRUMON, INDONESIA - NOVEMBER 13: A view of recently land clearing for palm oil plantation of the peatland forest inside Singkil peat swamp Leuser ecosystem, habitat of Sumatran orangutan (Pongo abelii) in Iemeudama village on November 13, 2016 in Trumon subdistrict, South Aceh, Aceh province, Indonesia. The Orangutans in Indonesia have been known to be on the verge of extinction as a result of deforestation and poaching. Found mostly in South-East Asia, where they live on the islands of Sumatra and Borneo, the endangered species continue to lose their habitat as a result of corporate expansion in a developing economy. Indonesia approved palm oil concessions on nearly 15 million acres of peatlands over the past years and thousands of square miles have been cleared for plantations, including the lowland areas that are the prime habitat for orangutans. (Photo by Ulet Ifansasti/Getty Images) , Photographer: Ulet Ifansasti/Getty Images AsiaPac

(Bloomberg) -- Dozens of the U.K.’s biggest supermarkets, fast food chains and food manufacturers have urged the government to go further with rules that would ban them from selling products linked to illegal deforestation.

McDonald’s Corp., Tesco Plc and Nestle SA are among 21 companies that have written to the U.K. government over proposals that will ban large businesses operating in the U.K. from selling beef, soy and other key commodities sourced from illegally deforested land.

The Department for Environment, Food and Rural Affairs is consulting on plans to require companies to show that commodities sourced in their supply chains, including soy, cocoa and palm oil, complied with local environmental laws when being produced.

But the retailers and food manfacturers, which also include Asda, J Sainsbury Plc and Mondelez International Inc., say the law needs to apply to all deforestation -- not just where it has been defined as illegal in individual countries. That puts them in line with environmental groups such as Greenpeace, which has argued that the proposals are seriously flawed, because local laws can be too weak, particularly in Brazil.

Deforestation accounts for 11% of greenhouse gases, and the vast majority of it is caused by the production of agricultural commodities, Defra said. In some countries, as much of 90% of forests are cut down illegally.

“We can’t solve this problem on our own and we need legislation that ensures comprehensive and standardized reporting up and down the supply chain, alongside incentives for suppliers who move toward more environmentally responsible production,” said Chris Brown, sustainable sourcing director at Asda.

The companies also want the laws to apply to companies based on the impact on deforestation rather than turnover.

The letter was also signed by poultry supplier Moy Park Holdings, a subsidiary of JBS SA, which has been targeted by environmental campaigners in recent months over its links to illegal deforestation in the Amazon rainforest.