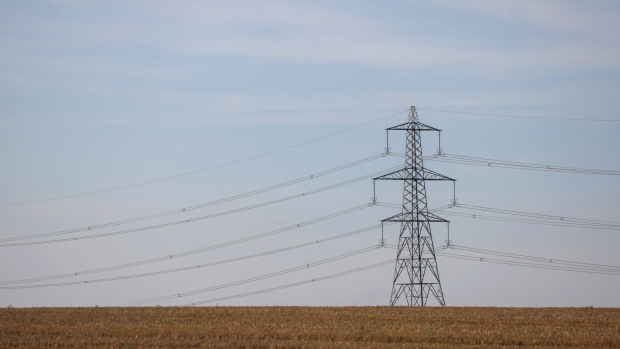 An electricity pylon near Rayleigh, U.K., on Tuesday, Sept. 21, 2021. U.K. Business Secretary Kwasi Kwarteng warned the next few days will be challenging as the energy crisis deepens, and meat producers struggle with a crunch in carbon dioxide supplies. Photographer: Chris Ratcliffe/Bloomberg , Bloomberg

(Bloomberg) -- The U.K. plans to bulk up the amount of power capacity it has ready for next winter, beyond the amount recommended by network operator National Grid Plc.

The government set the target for the 2022-23 power capacity auction 14% higher than National Grid’s recommendation, according to a letter from Business Secretary Kwasi Kwarteng. Under the system, Britain pays power stations to guarantee they will be available if needed to meet demand.

“This target reflects the broader uncertainties within the power sector,” Kwarteng wrote.

The nation is dealing with a confluence of energy-related issues -- including aging power stations, soaring natural gas prices and utilities that have gone bust -- with consumers facing ever-higher prices.

Power plants aren’t being replaced, partly due to a government push into renewables, particularly offshore wind, and partly because capacity auction prices haven’t been high enough to make it worthwhile building new stations. The stakes are high -- when it’s not windy, the U.K. relies heavily on gas, the price of which has risen almost 300% in the past year.

In addition, 4 gigawatts of nuclear capacity will shut by 2024, most recently Electricite de France SA’s Hunterston station, leaving a gap that needs to be filled without boosting emissions.

Average intraday power prices on Monday evening spiked to about 3,340 pounds ($4,506) a megawatt-hour, as wind output dropped and demand picked up. National Grid issued an automatic warning that the buffer of spare capacity it keeps had shrunk too low. The warning was quickly removed.

The government, under National Grid’s advice, holds a capacity auction four years in advance, awarding one-year contracts to existing power stations and 15-year agreements to new projects. This is then supplemented by a top-up auction held one year in advance to fine-tune the amount of available capacity.

The government has set the 2022-23 target at 5.36 gigawatts, up from 4.7 gigawatts suggested by National Grid.

In a separate National Grid document, the network operator said there will be more capacity unavailable than it previously expected, with some stations that had a four-year contract now unable to fulfill their obligations.

“We have received new information that an additional 900-megawatts of capacity with capacity market agreements for 2022-23 will not be operational” then, National Grid said in its advisory document.

National Grid declined to comment on which stations were no longer available.