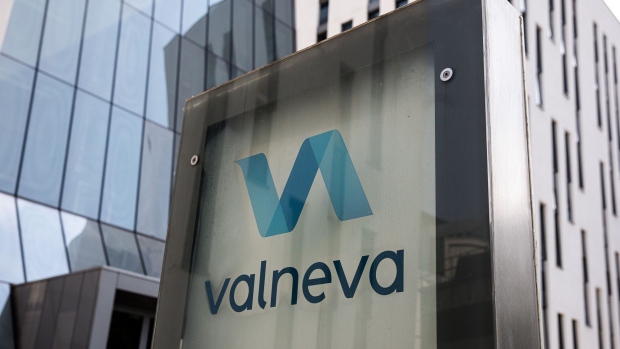 A sign stands outside the Valneva SA laboratories in Vienna, Austria, on Thursday, Aug. 6, 2020. The U.K. has signed agreements to buy 90 million doses of vaccines in development by drugmakers including Pfizer Inc., BioNTech SE and Valneva SE, joining countries around the world racing to secure supplies of protection against Covid-19. Photographer: Akos Stiller/Bloomberg , Bloomberg

(Bloomberg) -- The U.K. government threw Valneva SE “under the bus” when it terminated a $1.6 billion Covid-19 vaccine agreement after championing the French drugmaker’s shot, according to its chief executive officer.

The U.K.’s decision in September to cancel its order over an alleged breach of contract blindsided the company and came after Valneva had spent months renegotiating its agreement with Britain’s Vaccines Taskforce, Thomas Lingelbach said in an interview. The deal was worth as much as 1.4 billion euros.

The government acted because the company wouldn’t be able to meet 2021 supply targets, Lingelbach said. The delays are partly due to the slow expansion of a factory in Livingston, Scotland. That process is running about six months behind because of Brexit-related delays in sourcing building materials, which the government had known about and were a reason the contract was being amended, he said.

“They threw us under the bus at I would say the most difficult point in time” due to financial commitments that were already made, said Lingelbach. “We continue to believe that there is some level of accountability that the U.K. government has to take.”

The U.K. canceled the order one month before the company reported results of a trial of its Covid shot. The government had previously praised Valneva and the vaccine and invested millions of pounds to expand manufacturing capacity in Scotland. U.K. Health Minister Sajid Javid said at the time that the vaccine wouldn’t get approval from Britain’s drug regulator, but he later amended his comments.

“We cannot comment on commercial decisions,” a spokesperson for the U.K. Department of Health and Social Care said. “Our vaccination program is continuing to make phenomenal progress, with over 80% of the U.K. population now double-vaccinated against Covid-19.”

Lingelbach’s comments come after Kate Bingham, former head of the Vaccines Taskforce, said the government’s decision to cancel the Valneva contract was “inexplicable.”

“Instead of an amicable wind-down with a company that had massively extended itself to help during the pandemic crisis, the government alleged a breach of contract,” Bingham said Tuesday in a lecture at the University of Oxford.

The U.K. had ordered 100 million doses of the Valneva shot last year for delivery in 2021 and 2022, with an option to purchase another 90 million through 2025. The deal was one of a number Britain made to secure more than 500 million vaccine doses from multiple drugmakers, leaving the country with a surplus of supply.

Valneva signed a deal this month to supply up to 60 million doses to the European Union, after months of back and forth. The company is expecting approval from the EU and U.K. drugs regulators in the first quarter of 2022, Lingelbach said.

Prime Minister Boris Johnson said in Parliament on Wednesday that he hopes Valneva will play a role in the U.K.’s preparations for future pandemics.

The company’s shares have swung wildly since the U.K. and EU moves, trading 10% higher Wednesday after an unexplained plunge Monday. They’ve more than tripled over the past 12 months.

The Valneva shot uses an inactivated version of the virus to stimulate an immune response. It’s the only Covid vaccine using that tried-and-true technology to reach advanced trials in the U.S. and Europe. Study results last month found it elicited better immunity than AstraZeneca Plc’s shot, with fewer side effects.

Lingelbach said he’s often contacted by people who are hesitant about the newer technologies that have been used in the Covid vaccines -- such as messenger RNA -- and believes there is a large group of unvaccinated people who would be more willing to take the Valneva shot.

The termination “came to us completely out of the blue,” Lingelbach said. The company is trying to retain the factory and avoid layoffs even though it no longer needs the capacity, and is in discussions with other countries about potential deals, he said.

Results for trials in children, older adults and use of the shot as a booster for other vaccines are planned for next year.

“I am convinced that our product can still make a change to people’s lives,” said Lingelbach.