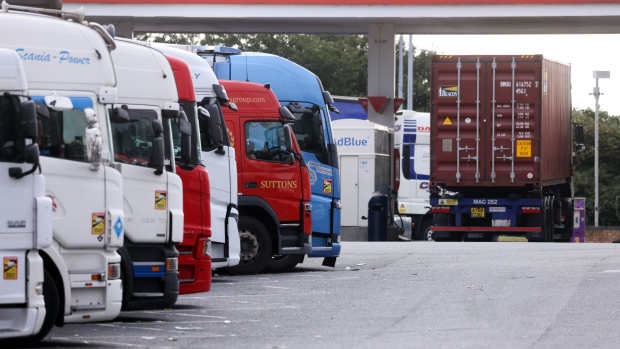 A row of trucks at a service station near Thurrock, U.K. , Bloomberg

(Bloomberg) -- The British government is considering suspending restrictions on the number of drop-offs that foreign truck drivers can make on trips to the U.K. in an effort to ease the country’s supply-chain problems.

Under proposals set out Thursday, Foreign trucks will be able make an unlimited number of stops during a two-week period after entering the U.K., potentially facilitating thousands of extra deliveries, the Department for Transport said in a statement. The new regime could come into force toward the end of the year and would last for six months.

The government is also offering 800 short-term work visas to pork butchers to help deal with a backlog of pigs awaiting slaughter.

The U.K. economy is facing an unprecedented wave of shortages as the effects of Brexit, the Covid-19 pandemic and a surge in natural gas prices leave the country with empty supermarket shelves, collapsing energy companies, gas stations running dry, and containers piled up by the side of ports.