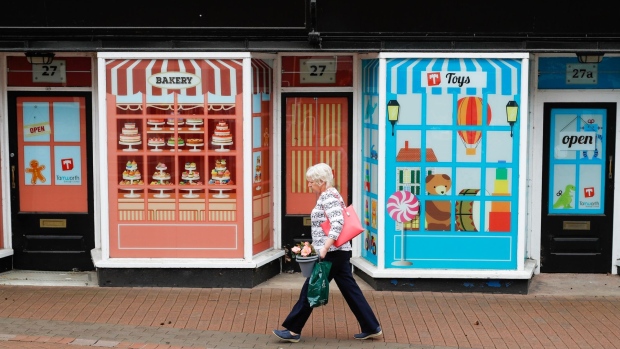 A woman walks past a closed store with a false frontage on Market Street in Tamworth, U.K., on Wednesday, May 26, 2021. Tamworth will benefit from the U.K. government's Future High Streets fund to boost infrastructure and redevelop underused properties. , Bloomberg

(Bloomberg) -- The U.K. is set to extend its ban on evictions of commercial tenants until next year to protect Covid 19-hit businesses from losing their premises while pandemic restrictions are still in place.

The ban had been due to end on June 30, but Chief Secretary to the Treasury Steve Barclay is likely to announce an extension of at least six months when he addresses the House of Commons later on Wednesday, according to two people familiar with the matter who requested anonymity discussing unannounced proposals. The planned extension was earlier reported by the Daily Telegraph.

Some U.K. businesses are facing delays to a return to business as usual after Prime Minister Boris Johnson pushed back a full lifting of restrictions due to rising coronavirus cases. Nightclubs have been closed for 15 months and social distancing rules are preventing pubs and entertainment venues from operating at full capacity, denting their profitability.

The evictions ban has been in place since the early days of the pandemic last year. The Ministry of Housing, Communities and Local Government issued a call for evidence in April on how it should unwind the freeze, saying a “carefully managed exit” was necessary to preserve tenant businesses and the millions of jobs they support.