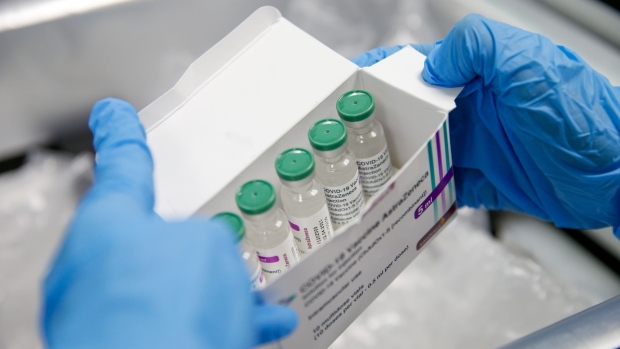 Vials of the AstraZeneca Plc Covid-19 vaccine at Central Mosque of Brent in the Willesden Green district of London, U.K., on Friday, March 19, 2021. Skepticism and misinformation are hampering efforts to protect the U.K.'s most diverse and deprived communities. Photographer: Hollie Adams/Bloomberg , Bloomberg

(Bloomberg) -- The U.K. will offer vaccine booster shots to over-50s and vulnerable groups starting next week as part of its winter plan to tackle coronavirus -- but mandatory face masks, vaccine certificates and advice to work from home could return if cases surge.

Boris Johnson’s government also left the door open to bringing back lockdowns if needed to prevent the National Health Service from being overwhelmed, according to the plan published Tuesday.

But the prime minister is hopeful that his “Plan A” will be enough to keep the virus under control: focusing on booster vaccinations, flu shots and making sure people with symptoms get tested and isolate if positive.

Though daily Covid infections remain relatively high, the government regards current pressure on the NHS as manageable and Johnson is keen to enter a new phase of the pandemic with more individual choice and freedom.

An overhaul of restrictions on international travel will also be announced before the end of the month, Health Secretary Sajid Javid told Parliament on Tuesday, amid reports that the U.K. could drop mandatory PCR (polymerase chain reaction) tests for returning passengers who are fully vaccinated.

Speaking ahead of a news conference led by Johnson, Javid said the U.K. would remove more regulations that “have governed our daily lives” while maintaining those “that are essential to our response.”

“But we’ve seen how quickly this virus can adapt and change,” he said. “So we’ve prepared a Plan B of contingency measures that we can call upon -- only if needed and supported by the data -- to prevent unsustainable pressure on the NHS.”

The U.K. could also bring back legislation to enforce national or regional lockdowns in England as a last resort, a person familiar with the matter said, adding this was not the government’s intention.

The ratio of cases to hospitalizations would be an “important factor” in determining whether contingency measures would be adopted, Johnson’s official spokesman, Max Blain, told reporters, though he said no single metric would be decisive.

The government earlier accepted the advice from its vaccine committee to go ahead with the Covid vaccine booster program.

The Joint Committee on Vaccination and Immunisation said an extra dose of the Pfizer Inc.-BioNTech SE vaccine is the preferred option -- regardless of which brand a person received previously -- and it should be given no earlier than six months after the second shot.

A half dose of the Moderna Inc. shot may be offered as an alternative, it said. In cases where people can’t have a messenger RNA vaccine because of allergies or other reasons, the AstraZeneca Plc shot may be considered for those who received it originally.

The U.K.’s plans are being closely watched globally. Knowing that people can safely receive a third shot that’s based on a different technology could give countries more flexibility in their efforts to widen vaccination coverage. At the same time, Britain’s move is likely to fuel the debate over boosters.

Some countries are moving ahead with extra doses amid an increased threat from the delta variant and studies suggesting waning antibody levels in vaccinated individuals. Yet World Health Organization officials have urged governments to wait at least until the end of the year so that poorer countries get better access to vaccines, adding that the scientific evidence is insufficient.

The government estimates nine countries have already announced booster campaigns, with potentially 18 others considering such a step, Jonathan Van-Tam, deputy chief medical officer for England, said in a televised press conference. The country understands the need to expand vaccine coverage globally, he said.

The doses should be given to people more at risk from serious disease, including those living in residential care homes, front-line health workers, and younger people with underlying health conditions, the panel said.

The plans follow a decision by the U.K. to offer vaccines to all children as young as 12 starting next week in a bid to reduce disruption in schools.

“This pandemic is still active,” Van-Tam said. “We know this winter could quite possibly be bumpy at times.”