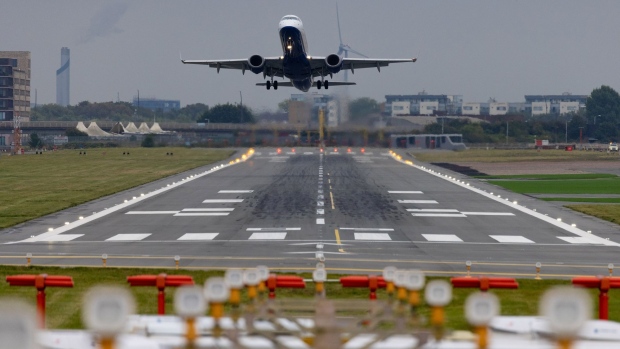 The U.K. will provide 3.7 million pounds ($5 million) in added funds for airport traffic-management projects aimed at reducing emissions and freeing up room for electric air taxis and drones to operate.

The increased funds, on top of 5.5 million pounds announced last year, will allow airports to define more efficient routes and reduce the so-called stacking of aircraft during busy times, according to Aviation Minister Robert Courts.

The improvements could cut carbon dioxide emissions by as much as 600,000 tons a year, according to the Department for Transport. While that figure is just about 1.5% of U.K. aviation’s annual output, it’s one of many incremental measures available to the industry before breakthrough technology still years away can usher in more dramatic steps toward decarbonization.

The airspace tools will allow aircraft to fly in narrower channels than are currently allotted, Courts said in an interview at London City Airport. That will allow planes to use space that’s currently off-limits and ease the need to fly in holding patterns when skies are congested, he said.

“Think of airspace as motorways in the sky -- they’re pretty wide,” Courts said. When they’re narrowed, “you will be able avoid certain areas, you can put in an air traffic where it’s better for them to go. That has impacts on noise and wider environmental factors as well as on emissions.”

Better use of airspace will also free up space for so-called electric vertical take-off and landing craft and drones to operate, as it will streamline operations and allow airports to earmark space for different users, Courts said.

Dozens of fledgling aerospace enterprises around the world are racing to bring flying taxis to market, and as these vehicles get closer to commercial operations, the infrastructure to support their operations is becoming a bigger priority.

No, Really, Flying Taxis Are Getting Closer to Giving You Rides