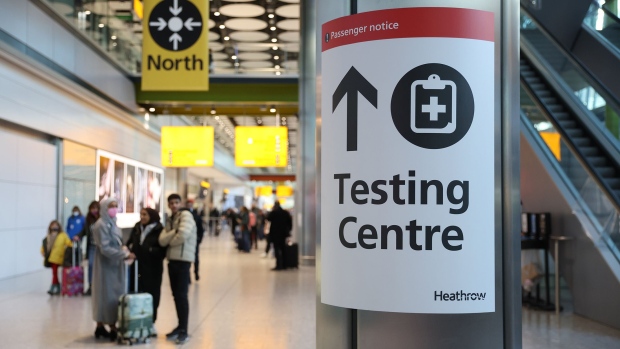 All travelers arriving in the U.K. starting at 4 a.m. on Nov. 30 must take a PCR coronavirus test on or before the second day of their stay and isolate until they receive a negative result. Face coverings will again be mandatory in shops and other indoor settings and on public transport. Booster shots may also be approved for more age groups within days, according to Health Secretary Sajid Javid.

The U.K. has recorded three confirmed cases of the variant first identified in South Africa and its health security agency warned Sunday it’s “very likely” more will be identified in the coming days. One strand of investigation suggests omicron may already have been in the U.K. for some 10 days.

Targeted testing around one of the cases will focus on staff and customers who were at a KFC restaurant in Brentwood, east of London, on Nov. 19, Essex County Council said Sunday. Scientists are concerned that omicron’s mutations may allow it to evade existing vaccines.

Speaking to broadcasters, Javid said the new measures are “proportionate” and there’s no need yet for the government to demand people work from home or impose lockdowns as it did earlier in the pandemic.

Still, there’s political risk for Johnson, who described his approach to relaxing pandemic rules in the summer as “cautious but irreversible.” Shifting course so close to the holiday season is likely to rekindle memories of last year’s chaos, when the prime minister dramatically changed the rules at the last minute and prevented families from meeting.

The timing is far from ideal for Johnson, whose Tories face an election for a parliamentary seat southeast of London on Thursday. Javid also was asked if the government expects a problem with compliance, given that face coverings are already required on London transport but the rules are widely ignored.

“The British public can see why the government has imposed this,” Javid said.

The announcement comes at a sensitive time in Johnson’s relationship with his governing Conservative Party, which has been tested by a series of U-turns and missteps in recent weeks.

The plan to implement the new Covid regulations before they are put to a vote in the House of Commons is likely to anger some Tory MPs further. Mark Harper, who chairs the party’s self-titled Covid Recovery Group told the Telegraph there should be a debate and vote on Tuesday, calling it a “litmus test for how seriously ministers take Parliament.”

The government said it will review the rules in three weeks, by which time ministers will be hoping data will show a strategy of light-touch social restrictions combined with vaccines will keep omicron at bay.