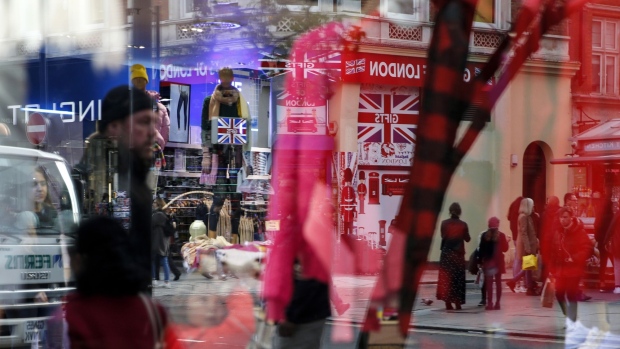 The window of a Gap Inc. fashion store reflects the British Union flag, also known as a Union Jack, signage of a tourist gift store in London, U.K, on Thursday, Oct. 31, 2019. In the lead-up to the vote, “both Labour and the Conservatives are expected to come out with pretty punchy views on tax, innovation and public spending, which could have significant implications for both corporates and consumers,” Emma Wall, head of investment analysis at stockbroker Hargreaves Lansdown Plc, said by email. Photographer: Hollie Adams/Bloomberg , Bloomberg

(Bloomberg) -- Top executives at trading platforms AJ Bell Plc, Hargreaves Lansdown Plc and Interactive Investor Ltd. are urging U.K. companies to open up their initial public offerings to retail buyers, who have largely been left out.

“For too long, U.K. listings have been the preserve of financial institutions and we urge you to consider the rights of retail shareholders in relation to IPOs,” Andy Bell, Chris Hill and Richard Wilson, the chief executive officers at AJ Bell, Hargreaves Lansdown and Interactive Investor, respectively, wrote in a Feb. 18 letter to the U.K. Economic Secretary to the Treasury John Glen.

Bell, Hill and Wilson call for a government consultation on giving retail buyers “fair access” to IPOs, saying the Treasury should consider making their inclusion a “regulatory obligation.” Boards, executives and advisers of companies considering London listings are also urged to ensure a proportion of their offerings are open to individual investors.

Day traders were excluded from 93% of London floats between October 2017 and October 2020, the executives said in the letter. The move to include mom and pop investors comes amid a buoyant U.K. IPO market, with British bootmaker Dr. Martens Plc and online greeting-card platform Moonpig Group Plc jumping more than 17% in their debut sessions after selling shares exclusively to institutional funds.

“Retail investors should have as much right as any other institution to invest at IPO, rather than having to ‘get in line’ and potentially buy the shares at a premium in the open market,” according to the letter, which the firms provided to journalists. New deals continue to line up, with London listings having raised $4 billion already this year, seven times as much as during the same period in 2020, according to data compiled by Bloomberg.

Interactive Investor said in a separate statement that a survey of 2,008 day traders showed about 80% would like access to all IPOs and that “it is unfair to exclude them.”