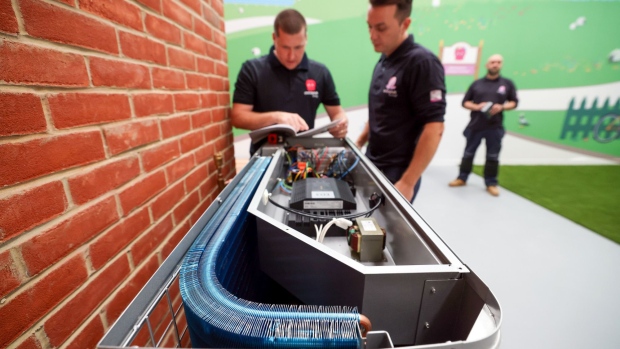 Engineers work on installing an Ecoforest heat pump at the Octopus Energy Ltd.'s training and R&D centre in Slough, U.K., on Tuesday, Sept. 28, 2021. Octopus, backed by Al Gore's sustainability fund, is helping teach the plumbers to install heat pumps that will play a pivotal role in the U.K.’s strategy to have net-zero emissions by 2050. , Bloomberg

(Bloomberg) -- Days before it hosts United Nations negotiations over how to ramp up the global fight against climate change, the U.K. released a sweeping plan to decarbonize its economy by targeting everything from the finance industry to home heating.

The masterplan will give British politicians something to tout as they put pressure on other nations to raise their green ambitions ahead of the COP26 summit in Glasgow, Scotland. The challenge will be following through on the ambitious proposals, which include putting levies on natural gas, boosting subsidies for electric vehicles and large investments in technology to capture carbon emissions and store them away.

“As the most detailed net-zero strategy submitted to the UN by any nation, it will augment the U.K.’s credibility,” said Sepi Golzari-Munro, acting director of the Energy and Climate Intelligence Unit, a London-based advisory firm.

Prime Minister Boris Johnson has said that the climate talks will, as always, be “ extremely tough”. Discussions among Group of 20 leaders, which will set the tone for the Glasgow summit, have already run into major hurdles. The U.K. wants world leaders to agree on a plan to phase out coal, the dirtiest fossil fuel, and set a target for reaching net-zero globally.  Having a plan to make difficult changes at home could help bolster its case that others should do the same.

A big question around the net-zero plan is how much it will cost, and who will bear it. In a separate document released on Tuesday, the Treasury estimated a price tag of as much as 2% of economic output in 2050 that could also put a hole in tax revenues. But it stressed that the cost of doing nothing will be greater.

The U.K. faces its own risks from a warming planet. Average land temperatures have risen by around 1.2 degrees Celsius compared to pre-industrial levels, while sea levels have increased by 16 centimeters since 1900, according to the Climate Change Committee. Yet adaptation isn’t happening fast enough. In the last five years, more than half a million new homes were built that won’t be resilient to future high temperatures, according to the panel. More than 4,000 heat related deaths have taken place in England alone since 2018.

British companies welcomed government support for heat pumps, electric vehicles, nuclear power and carbon capture, but also raised concerns about the lack of clarity over how the changes would impact their bottom lines.

“To truly transform the U.K. economy based on sustainable and green growth, we need to push further and faster and make key decisions on how to finance the transition to net zero,” said Matthew Fell, chief policy director at the Confederation of British Industry, the nation’s biggest business lobby. “An honest conversation needs to happen here in the U.K. about how we pay to go green.”

Some of the cost will be borne by consumers, perhaps in the form of higher taxes. The U.K. will lose tax revenue from fossil-fuel related activity as it phases out carbon-intensive energy, the Treasury said, though the income from carbon pricing will be able to help support the transition for a period of time. Unless the government boosts public spending, it will have to consider raising taxes to help fund the transition. Still, any changes should avoid passing costs onto future taxpayers, the Treasury said in a separate document.

Environmental advocates meanwhile argued that the Treasury was only looking at one side of the issue without taking into account how much the U.K. economy could benefit from moving quickly into clean technologies and new industries. The net-zero strategy argues that the transition would create 440,000 jobs by the end of the decade, and part of the plan relies on leveraging 90 billion pounds ($124 billion) of private investment within that time frame.

“Net Zero is the biggest investment opportunity the U.K. has ever seen,” said Heather McKay, a policy adviser at the thinktank E3G. “It is imperative that the Treasury completes its macroeconomic analysis in the net zero review to include the investment opportunities of the economic transition, as well as the costs.”

The plan was presented against the backdrop of a deepening energy crisis in Britain. Surging gas and power prices are beginning to curb industrial output, which could put the U.K.’s economy under strain. The global energy crunch also threatens to make the Glasgow talks more difficult as fossil fuel producers and some developing nations use the crisis to argue for a slower transition.

While the measures and complicated graphics released on Tuesday lay out a clear path to eliminate the U.K.’s emissions, turning those ideas into law will take time. It will also require British politicians to maintain their enthusiasm for the policies after the fanfare of COP26 subsides.

“With an eye on COP it is all about ambition and aspiration, stirring mood music rather than scrupulous detail,” said Rob Gross, director at the U.K. Energy Research Centre. “After COP there will be a need to back fill on how this will all be achieved.”