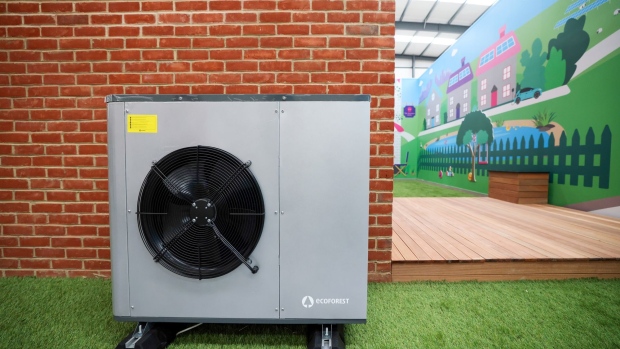 An Ecoforest heat pump at the Octopus Energy Ltd.'s training and R&D centre in Slough, U.K., on Tuesday, Sept. 28, 2021. Octopus, backed by Al Gore's sustainability fund, is helping teach the plumbers to install heat pumps that will play a pivotal role in the U.K.’s strategy to have net-zero emissions by 2050. Photographer: Chris Ratcliffe/Bloomberg , Bloomberg

Prime Minister Boris Johnson unveiled a 3.9-billion pound ($5.4 billion) plan to drive down carbon emissions from the U.K.’s homes and offices as he seeks to position the country as a leader in the fight against climate change.

Measures include grants for homeowners who replace gas boilers with cleaner heat pumps, and funding to help decarbonize poorer households and public sector buildings, according to a government statement. The measures will be detailed in the long-delayed Heat and Buildings Strategy, due for publication on Tuesday.

“Our new grants will help homeowners make the switch sooner, without costing them extra, so that going green is the better choice when their boiler needs an upgrade,” Johnson said.

The government’s push for greener buildings comes as it prepares to host the COP26 international climate conference in Glasgow, Scotland, beginning Oct. 31, and leaders are keen to show they’re taking steps to reduce global warming. At the same time, Europe is facing an energy crisis, with natural gas prices recently hitting record highs even before the winter heating season truly gets under way.

Johnson is trying is trying to slash carbon emissions from the U.K.’s draughty building stock, responsible for about 21% of the country’s greenhouse gases. He’s hoping to use government incentives to drive down the costs of electric heat pumps -- which can cost three times as much as traditional gas boilers -- while also spurring the insulation market. The new strategy could support 240,000 jobs by 2035, the government said.

Long-portrayed as the low-hanging fruit of emissions reduction, successive governments have tried and failed to spur large-scale insulation programs -- including Johnson’s own administration, whose 2 billion-pound Green Homes Grant program foundered earlier this year amid a slower-than-expected roll-out.

Greenpeace U.K. climate campaigner Caroline Jones called for a “fully-funded, nationwide program to insulate our homes at a scale and speed that the government hasn’t fully grasped.”

The publication of the strategy -- initially planned for the spring -- was delayed amid disagreement between the Treasury and Johnson over how much to pay homeowners for installing more expensive but cleaner heat pumps, as the government seeks to phase out gas boilers by 2035. Under the new plans, “no one will be forced to remove their existing fossil fuel boilers” amid the 14-year transition, the government said.

To ensure that the pumps are no more expensive to run than boilers, the government said it plans to reduce the cost of electricity over the next decade by shifting levies away from power bills, with final decisions due next year.

Johnson has set a target to install 600,000 heat pumps a year by 2028 -- a 20-fold increase on current levels. Less than 1% of homes currently use the technology. Government advisers estimate that the U.K. will need to ban the sale of all new gas boilers from 2033 and boost annual spending on decarbonizing heat significantly over the next decade.

The 450 million pounds dedicated to the grants will be enough to pay for about 90,000 boiler-to-heat pump replacements. About 23 million U.K. homes ultimately need converting to cleaner options. The government said it aims to work with industry to drive down the cost of heat pumps to parity with gas boilers by 2030.