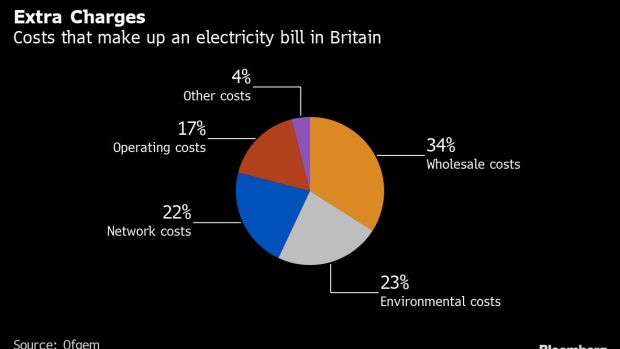 Electricity transmission pylons above residential houses in Brighton, U.K., on Thursday, Nov. 12, 2020. Brexit talks are going down to the wire, and the European Union's chief negotiator Michel Barnier is threatening British access to the continent's single energy market as a way of extracting concessions on fishing rights. Photographer: Chris Ratcliffe/Bloomberg , Bloomberg

(Bloomberg) -- Several U.K. utilities are lining up to support changes to how households are taxed in Britain for their energy use.

In an effort to make electricity cheaper for charging cars and heating homes, the Prime Minister Boris Johnson’s government is considering moving some levies away from power to gas bills. A move that could kickstart the mammoth task of decarbonizing the 85% of households that use the fossil fuel.

Octopus Energy Ltd., now the fifth biggest supplier in the market with 2 million customers, is one pushing for the change. The company supplies both electricity and gas, selling about one billion pounds ($1.4 billion) of the fossil fuel each year.

“I just don’t want to sell any,” said Greg Jackson, chief executive officer of Octopus said in an interview. “It’s bad for the planet. The quicker we can move away from it, the better.”

Jackson discussed what it would take for the U.K. to move to 100% renewable energy with the U.K. premier, when he visited the company’s offices in October. Rebalancing of carbon taxes was part of the discussion, Jackson said.

Now, 23% of electricity bills relate to the cost of government programs to save energy, reduce emissions and encourage the take up of renewable energy, according to regulator Ofgem. The government is expected to announce new levies on gas in the budget next month.

Moving these charges to gas “would mean that when people make decisions about how they heat their home in future, and how they drive their car, they will benefit financially from making decisions that are green, that’s got to be good,” Jackson said.

The government wants heat pumps to replace gas boilers and is aiming for 600,000 to be installed annually by 2028, a 20-fold increase from the current rate in a country where less than 1% of the homes use the technology. Heat pumps typically cost almost three times as much as a gas boiler, and they only work in well-insulated homes.

Adding charges to gas means that as many as 24 million homes could be paying more to heat their homes. Even if some of the cost is offset by cheaper electricity bills, the move is likely to be unpopular.

Some utilities argue that the charges should be moved to general taxation to better spread the cost and ease the burden on the poorest households.

Britain’s biggest supplier of gas to homes, Centrica Plc, has 11.6 million customers and declined to comment.

The cost burden means that any changes brought in will have to be phased, Georgia Berry, director of sustainable business at Ovo Energy Ltd, the second biggest supplier in the U.K., said in an interview.

The difficult task is to figure out how to “price pollution effectively to ensure that the polluter pays, but not decimate industries that are already struggling or punish households who use gas heating systems,” she said. “Having no carbon costs on gas is no longer feasible.”

The change could be an opportunity for energy suppliers to create new business models, she said. Very few households will be able to cover the upfront costs of a heat pump which creates an opening for utilities to finance the equipment.

Electrifying heating needs to happen to get anywhere close to the U.K.’s target to cut emissions 68% by 2030 compared to 1990 levels.