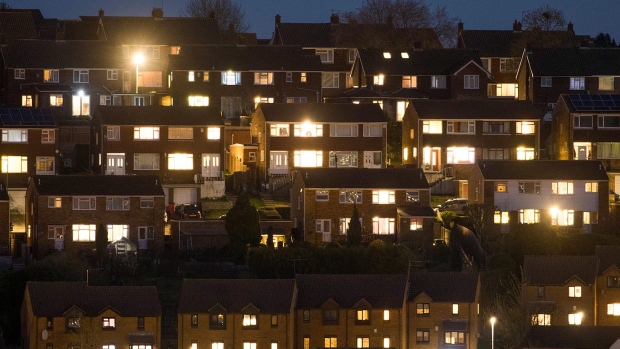 (Bloomberg) -- Millions of households in the U.K. will face steeper energy bills this winter after utilities got the green light to raise prices, reflecting higher wholesale costs.

Energy market regulator Ofgem increased its price cap to a record level for how much utilities can charge customers for electricity and natural gas. Power prices are surging primarily because of gas, with concerns about low stockpiles and lack of additional supplies pushing U.K. costs to their highest since 2005. Elevated prices will likely extend into winter, when colder weather increases demand.

“Energy companies will argue their margins have been squeezed and they are losing money due to the rapid rise of wholesale costs this year,” said Tom Lyon, director of energy at price comparison website energyhelpline.com. “However, these complaints should fall on unsympathetic ears as most households pay through the nose for their gas and electricity.”

The 12% increase to a new level of 1,277 pounds ($1,778) takes effect in October and will run through March for customers on default tariffs.

​U.K. gas prices have risen 92% this year, while power has gained 55% and is near a 13-year high, according to exchange and broker data.​ Surging global fossil fuel prices are driving up inflation for consumers, making energy tariffs not covered by the price cap more expensive, Ofgem said.

The move will put upward pressure on inflation in the U.K., which unexpectedly leaped above the Bank of England’s 2% target in the past few months. The central bank expects consumer prices to increase 4% later this year, driven mainly by the rising cost of energy, and warned on Thursday that it’s likely to tighten monetary policy to prevent those gains from sticking.

​The price cap protects 11 million households that haven’t switched energy suppliers and 4 million consumers with prepayment meters. Ofgem adjusts the mechanism twice a year to reflect wholesale costs, which make up about 40% of the cap.

At the previous adjustment announced in February, Ofgem raised the cap by 9.2%. The second consecutive increase that will also kick in just before winter is the “ultimate triple blow for homes,” according to Justina Miltienyte, energy policy expert at Uswitch.com

On Thursday, the regulator decided to remove an allowance for bad debt that previously was included to help suppliers recover some of their losses caused by the pandemic.

“Ofgem sets the price cap at a fair level for customers but it also needs to reflect when suppliers face increased costs to allow them to keep operating in a market where most providers are making little or no profit at present,” said Emma Pinchbeck, chief executive officer of EnergyUK, that represents the energy industry.

(Updates with comments in the third paragraph.)