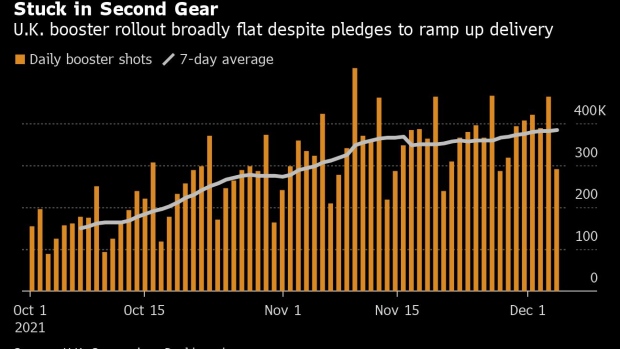 The operation to roll out Covid booster shots to all adults in the U.K. is struggling to pick up speed even as the omicron variant spreads rapidly across the country.

Fewer U.K. adults received a third shot of vaccine on Saturday than they did seven days earlier, the day when Prime Minister Boris Johnson called for an increase in the pace of the rollout. Regulators authorized booster shots for 18-39-year-olds two days later, on Nov. 29. However, those aged under 40 remain unable to book a third shot of vaccine using the government’s website.

The latest snags in vaccine delivery come after the U.K. beat many other countries with its inoculation drive. Despite the challenges facing the booster rollout campaign, the U.K. has already delivered 30 booster doses per 100 people, more than double than in the U.S. and the European Union, according to Our World in Data.

Health Secretary Sajid Javid told Parliament on Monday that it is highly likely the U.K. is seeing community transmission of the new variant, and that omicron could spread faster than previous variants. A total of 336 cases were already confirmed across the nation, Javid said.

Neil Ferguson, an epidemiologist at Imperial College London who advises the U.K. government, told the Times newspaper that omicron infections may be doubling every three days, or even faster.

Johnson said the U.K. government will wait for guidance on the omicron strain ahead of a review of pandemic rules next week. Until then, the prime minister has given Britons the green light to go ahead with festive events such as staff Christmas parties.