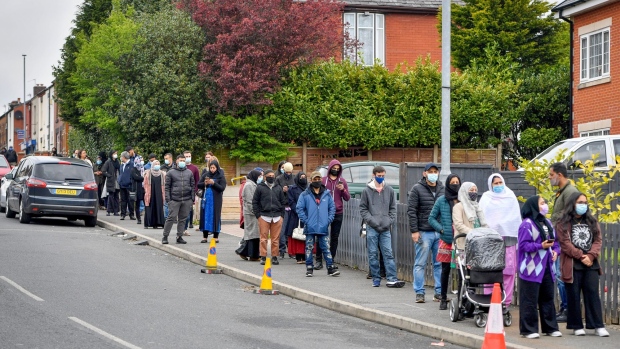 Members of the public queue to receive COVID-19 vaccinations in a pop-up vaccination bus parked at Essa Academy in the Daubhill area of Bolton, U.K., on Friday, May 14, 2021. U.K. ministers may bring forward second vaccine doses for millions of people and local restrictions could be imposed to curb the spread of a Covid-19 variant from India. , Bloomberg

(Bloomberg) -- The U.K. recorded the most coronavirus cases in a day since mid-February, amid warnings the current wave of infections driven by the highly transmissible delta variant may still be weeks from peaking.

More than 11,000 new cases of the disease were reported on Thursday, along with 19 deaths, according to the Department Health. A study by Public Health England showed infection rates increasing across all age groups, but are highest among people aged 20 to 29. Separately, the government said eight in 10 adults have now had their first vaccine dose.

The data illustrates how the delta variant, first identified in India, upended the government’s plan to lift remaining pandemic restrictions this month. Prime Minister Boris Johnson announced a four-week delay on Monday to allow more adults to receive a second dose of the vaccine, which data show significantly increases protection against the new strain.

“It is important to take up the offer of the vaccine to protect yourself and others,” PHE Medical Director Yvonne Doyle said in an emailed statement. “Case rates have increased across all age groups and regions around England, and we are seeing further increases in hospitalizations.”

Research from Imperial College London published Thursday found the prevalence of Covid-19 in England is increasing exponentially, driven by younger age groups that haven’t been vaccinated.

The current infection surge will “definitely” lead to more hospital admissions and deaths, England’s Chief Medical Officer Chris Whitty told a medical conference on Thursday, according to the Press Association.

“The height of that surge is still uncertain and we’ll have to see how this goes over the next several weeks,” he said. He also warned the National Health Service should brace for another wave of infections over the winter.

The latest data show a surge in cases in Cornwall, which hosted last week’s Group of Seven summit, with 411 cases reported in the seven days to July 12.