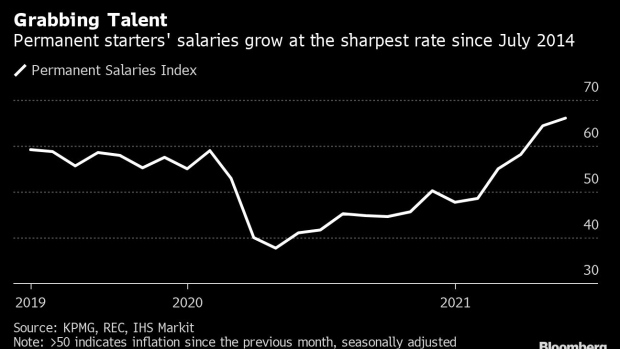 A commuter checks his mobile phone whilst walking over London Bridge in London, U.K., on Thursday, May 27, 2021. More than half of workers in London's financial districts may now be traveling back into the office, the most since lockdown measures began easing in the U.K., according to rising sales of tuna baguettes and lattes. Bloomberg , Bloomberg

Starting salary increases approached a seven-year high, with all regions of the U.K. experiencing rapid rises, according to data from the Recruitment and Employment Confederation, KPMG and IHS Markit. The jobs site Indeed said hospitality companies in particular were lifting wages, with some offering sign-on bonuses to entice workers.

“We are seeing wage inflation directly linked to demand,” said Niki Turner-Harding, senior vice president of the recruitment firm Adecco U.K. and Ireland. She said those hiring many people quickly find that raising pay is the “only option.”

The findings add to concerns that the rapid re-opening of the economy will lift price pressures and prompt the Bank of England to rein in its stimulus program. The government’s Office for Budget Responsibility also is concerned that longer-term labor shortages may indicate scars on the economy both from Covid-19 and lower levels of immigration following Britain’s exit from the European Union.

Earlier this month, the central bank’s Governor Andrew Bailey warned that labor market tightness for some occupations could feed wage pressures, presenting it as a source of friction that may hold back the recovery.

Prime Minister Boris Johnson’s move to scrap most of curbs on socializing and work by July 19 have triggered a hiring boom. More than half of companies tried to recruit staff in the second quarter, and 38% expect to expand in the coming months, higher than the rate recorded before the virus struck, according to a survey by the British Chambers of Commerce.

“As firms are released from lockdown restrictions, the skills shortages they experienced before the pandemic are once again starting to bite,” said Jane Gratton, head of people policy at the BCC.

Some recruiters reported a significant decline in workers from the EU after Brexit threw up new hurdles to those wishing to take jobs in the U.K. Lockdowns during the pandemic shifted employment patterns and prompted many people to pursue different careers outside the industries that were hardest hit by restrictions.

REC said demand for permanent staff in June surged at the highest rate since its records started in 1997. Hospitality staff in June enjoyed a 5.6% increase in their advertised median wage when compared with the second quarter in 2019, Indeed data showed. Those workers are now earning 9.50 pounds per hour, higher than the minimum wage of 8.91 pounds. Indeed also found evidence of rising wages for drivers and construction.

“Companies are trying all sorts to encourage applications -- even paying people to turn up to interviews,” said Novo Constare, founder and chief operating officer of the company’s flexible working platform, Indeed Flex. “A lot of people may have moved sector. Although they may want to return to hospitality, they may be scared of being let go or put on furlough again. They’re not ready to make that jump back yet.”

E-commerce companies in particular were boosting pay after a year of strong growth when traditional shops were shut, Adecco’s Turner-Harding said.

Foreign workers that returned to their home countries in the past year have also contributed to shortages. The U.K.’s Road Haulage Association estimates there’s a shortage of 60,000 truck drivers mainly because many returned to their own countries.

Some companies are having trouble getting qualified people to apply for open jobs. Adecco said they had seen campaigns for lower-skilled positions in hospitality receiving a fraction of their usual response rate.