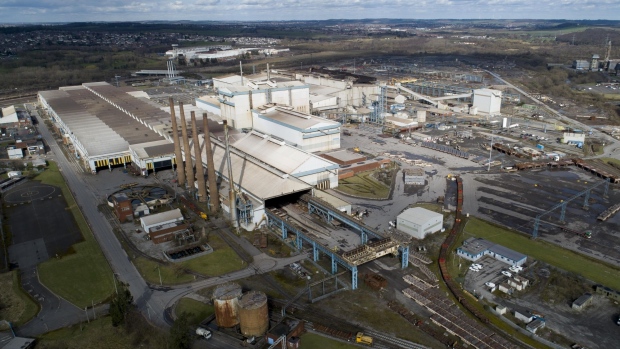 The steel bar mill and engineering bar manufacturing plant, operated by The Liberty Steel Group, in Rotherham, U.K., on Monday, March 15, 2021. British government officials are in constant contact with Liberty Steel amid concerns jobs and plants may be at risk because of the unraveling of Greensill Capital, the biggest lender to Sanjeev Gupta's GFG Alliance Ltd., which includes the steelmaker , Bloomberg

Boris Johnson’s government said the U.K. dispute with the European Union over post-Brexit trade should have no bearing on whether the U.S. retains import tariffs on British steel and aluminum.

The Financial Times reported Thursday that Joe Biden’s administration is delaying the removal of tariffs on metals from the U.K. due to Johnson’s threat to suspend parts of the Brexit divorce deal relating to Northern Ireland. The U.S. president has previously warned the U.K. over its approach to the region.

“It might be true in terms of how some people in the United States feel, but it is a false narrative,” U.K. Trade Minister Penny Mordaunt told Parliament, when asked about the FT report. “These are two entirely separate issues.”

The tariffs are a significant headache for Johnson, who pitched an improvement in trading relations with the U.S. as one of the major benefits of exiting the EU. Instead, whereas the bloc reached a deal to end Donald Trump-era aluminum and steel tariffs and its own retaliatory charges on more than $10 billion of exports, the British government has so far failed to strike a similar agreement.

“We are working closely with the Biden administration to remove damaging tariffs,” Johnson’s spokesman, Max Blain, told reporters at a regular briefing.

The Financial Times cited a communication from a U.S. Department of Commerce official who expressed concerns about British threats to trigger Article 16, the mechanism for unilaterally suspending the part of the Brexit divorce deal that covers Northern Ireland trading arrangements.

According to the newspaper, the U.S. had informed the U.K. of the reason for the hold up in ending the steel tariffs.

In Parliament, Mordaunt said International Trade Secretary Anne-Marie Trevelyan will travel to the U.S. next week to hold talks with her counterparts about the tariffs “and other matters.” The U.K. will tell the U.S. it has “acted in good faith” on the Northern Ireland trade issue, and that Brexit Minister David Frost would be “pragmatic” in his dealings with the EU, she said.

Trevelyan herself told MPs the U.S. is currently reviewing the free trade agreement negotiations that began under the Trump administration, and that the U.K. is feeding into that process. “We have always been clear that a good deal is better than a quick deal and we are there whenever the US are ready to continue those discussions,” she said.

The U.K. Department for International Trade said the government is engaging “closely” with the Biden administration on the Northern Ireland protocol, and that the two countries share a commitment to the peace process in the region.