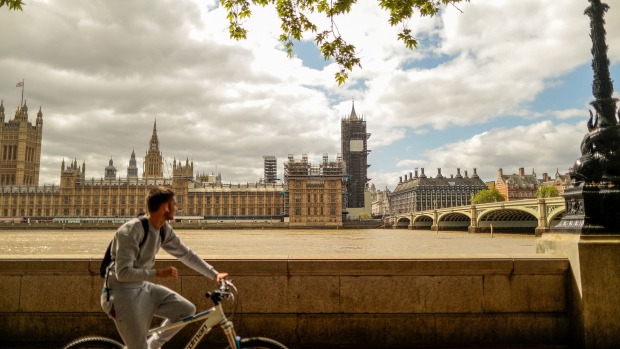 Prime Minister Boris Johnson is considering sealing off Greater London and ordering at-risk members of the population to stay at home under a potential scenario designed to avert a second national lockdown, according to news reports on Saturday.

Possible measures include locking down the capital if infection rates spike and tightening quarantine rules on those flying into the U.K., The Sunday Telegraph reported. There would be travel curbs in and out of the M25 highway encircling Greater London and a ban on overnight stays, according to the Sunday Times.

Elderly people and those considered to have an increased risk from Covid-19 could be asked to stay at home, and “harder” local lockdowns could be ordered than the restrictions already imposed on parts of northern England.

The reports come less than two days after the government postponed the planned easing of lockdown measures amid a surge in infections. Johnson ditched plans to reopen leisure facilities such as bowling alleys, and canceled trials aimed at getting sports fans back into stadiums.

Less than a month ago, Johnson compared the idea of a second nationwide lockdown as a tool similar to a “nuclear deterrent” -- a method of last resort. The U.K. has suffered the highest death toll in Europe and the government has been accused of waiting too long to impose the lockdown in March, raising the stakes for Johnson if he gets it wrong again.