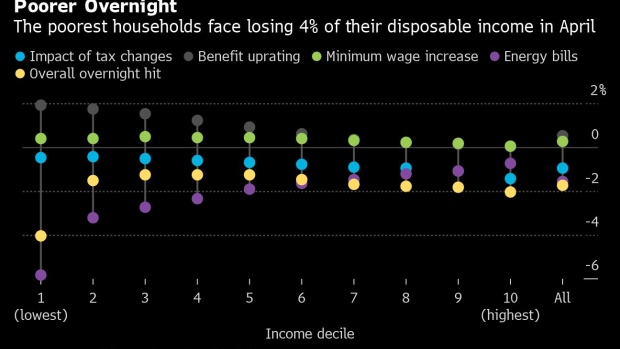 (Bloomberg) -- British workers will need pay rises of 8% on average this year to offset the living standards squeeze from higher energy bills, tax rises and broader inflation if the government does nothing to help.

Analysis by the Tony Blair Institute for Global Change shows that the poorest fifth of U.K. workers will need a wage increase of more than 10% to compensate them for the hit to incomes. The work looked at the combined impact of the April hike in energy bills and taxes, alongside general inflationary pressures.

The figures, which are adjusted to account for an improvement in the in-work benefit taper, underscore the full scale of the living standards crisis facing working households this year. Even better-off workers will need pay rises of more than 7% to maintain the same level of household income. The latest official figures show earnings rising at just 3.5%.

“Come April, inflation, energy bills and tax rises will squeeze low-income households much harder than the better off,” said Ian Mulheirn, chief economist at the Institute for Global Change. “There’s a lot of pain to go around, and it’s hard to see any way the government can avoid shouldering a chunk of it.”

The analysis strips out annual inflation of 5.5% for the fiscal year 2022/23 to reflect the experience of households on different incomes. Rising prices hit those on low incomes hardest.

The minimum wage is due to rise by 6.6% in April. Even that will not be enough to compensate for the spike in energy bills in April. Many people on the lowest incomes are paid above the minimum wage but work few hours and will need double digit pay rises to cover higher costs.

Workers are increasingly turning to industrial action to secure better pay and compensate for the income squeeze. In the last two weeks, garbage-truck drivers in Eastbourne got an 11% pay rise, drivers of heavy-goods vehicles at Luton Airport a 20% increase and 185 vehicle technicians at Mercedes-Benz Retail Group a 13% rise.

Unite general secretary Sharon Graham is pushing for 7.5% pay settlements this year, which the union says is a “more accurate figure of rising costs” than the current headline inflation rate of 5.4%.

Even workers on better pay in the top two fifths of earners, who need pay rises of over 7% to offset higher living costs, are threatening industrial action. Economists at the National Institute for Economic and Social Research are currently staging a two-week walk out and staff at the City regulator, the Financial Conduct Authority, are voting to strike.

With the number of job applicants per vacancy at historic lows and people prepared to move jobs in record numbers to increase earnings, employers are under greater pressure to lift wages.

Employers themselves are feeling the pinch from rising input costs. Of 505 business that responded to a survey by the Institute of Directors, 38% said they would have to “raise prices to offset some or all of the cost” of the April payroll tax rise, which is levied on businesses as well as workers.

The government is preparing to help, with economists expecting a living standards crunch bail out costing more than 5 billion pounds ($6.7 billion). Unemployed households on welfare who cannot seek pay rises and whose benefits are due to rise by 3.1% are particularly vulnerable.

Last week, Business Secretary Kwasi Kwarteng said he was confident the government will “mitigate the impact of substantially higher bills.” For the typical family, with a disposable income of 27,000 pounds, the energy bills and tax rise alone are expected to add 1,200 of costs.