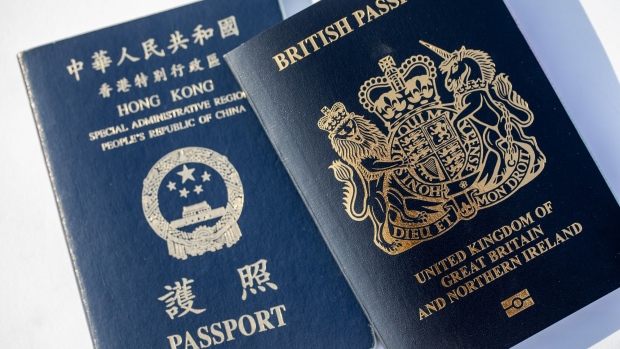 (Bloomberg) -- The U.S. has outlined eligibility criteria for a program that allows Hong Kong residents to remain temporarily in the country to escape Beijing’s crackdown on the Asian financial center.

A person of “any nationality” with a Hong Kong passport, identity card or document, or British National (Overseas) passport and who has continually lived in the U.S. since Aug. 5 would qualify under guidelines released Wednesday by the U.S. Citizenship and Immigration Services.

U.S.-based democracy activist Samuel Chu praised the Biden administration on Twitter for adopting the “broadest and most inclusive definition” of Hong Kong identity. While the U.S. hasn’t said how many people it expects to apply, Chu has previously estimated tens of thousands of people from the former British colony, including many on student visas, could qualify.

President Joe Biden announced the program to allow Hong Kong residents to remain and potentially work in the U.S. for as long as 18 months in August, the latest in a series of actions Washington has taken in response to a sweeping national security law Beijing imposed on the Asian financial hub in June 2020.

In the past 15 months, the U.S. has rolled back special economic privileges granted to the city, sanctioned senior officials who oversee the territory and warned American businesses about the risks of operating under the new law, which it says undermines rights and freedoms. Hong Kong’s chief executive, Carrie Lam, has said the law restored order and stability to the city, after anti-government protests that were often violent caused mass unrest in 2019.

“Offering safe haven for Hong Kong residents who have been deprived of their guaranteed freedoms in Hong Kong furthers United States interests in the region,” Biden said in his Aug. 5 memorandum announcing the program. “The United States will not waver in our support of people in Hong Kong.”

The U.K. has also launched a program that it estimates could see as many as 322,000 Hong Kong residents move to the country by 2025, and Australia and Canada have opened up special visa arrangements for people looking to leave the city.