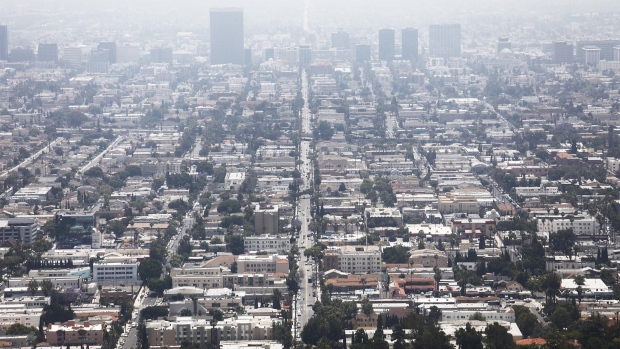 (Bloomberg) -- After years of decline, a spike in air pollution may have taken the lives of almost 10,000 additional Americans over two years.

Following a 24% drop between 2009 and 2016, particulate matter air pollution in the U.S. increased 5.5% in 2017 and 2018, according to a new analysis of Environmental Protection Agency data by two Carnegie Mellon economists.

The working paper published this week by the National Bureau of Economic Research may signal a deadly change in U.S. environmental health.

“We have been making such steady progress regarding air quality,” said C. Arden Pope III, a Brigham Young University economist and specialist on pollution’s threat to health. “This progress has resulted in substantial health benefits. It is disturbing to see what may be the beginning of deteriorating air quality in the U.S.”

Air pollution is the fifth leading cause of death around the world. Its primary component is particles smaller than 2.5 millionths of a meter, often referred to as particulate matter or PM2.5. While pollution of this kind varies by region, month and even day, the negative changes observed by the researchers can’t be explained away by such fluctuations, said study co-author Nicholas Muller.

The seven-year drop in particulate matter levels itself was a significant trend, which makes its reversal all the more significant, he said.

Muller and co-author Karen Clay looked at the substances hanging over U.S. cities and found evidence for three potential sources of the pollution rebound: increased economic activity, virulent wildfires and a smaller number of EPA enforcement actions. It is important to note that the pair have not made any causal links between the three suspects and the increase of air pollution.

Finally, they also looked at pollution and enforcement trends. If polluters for some reason fail to follow Clean Air Act rules, PM2.5 can pick up. Clay and Muller found that EPA enforcement activity has trended down since at least 2009.

The decline in EPA enforcement of the Clean Air Act makes sense: More places in the U.S. are in compliance, so naturally fewer of them will draw regulatory scrutiny.

What does not make sense is why EPA enforcement actions have failed to rise along with pollution. “That’s a break in the broad pattern that we find interesting,” Muller said. The pair plan to study that question next.

To contact the editor responsible for this story: Joshua Petri at jpetri4@bloomberg.net, David Rovella