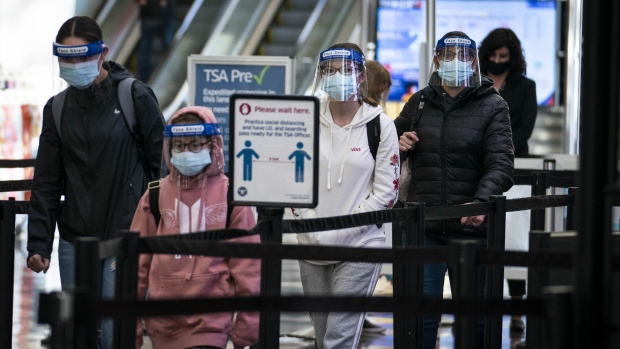 Travelers wearing protective masks and face shields walk through Ronald Reagan National Airport (DCA) in Arlington, Virginia, U.S., on Wednesday, Nov. 25, 2020. While passenger volumes are less than 40% of last year’s levels, late demand for holiday travel has been driven by fares that are substantially lower than typical as airlines desperately try to fill seats during the coronavirus pandemic. Photographer: Sarah Silbiger/Bloomberg , Bloomberg

Travelers screened at U.S. airports on Thanksgiving Eve were the highest since coronavirus shutdowns descended in mid-March as many Americans bucked warnings by health officials.

More than 1.07 million people went through airport screening on Wednesday, according to data from the Transportation Security Administration. That’s still only about 40 per cent of the level on the equivalent day last year.

The period around Thanksgiving is one of the busiest for travel in the U.S. In three of the past six days, TSA screened more than one million people each day. In the other three days, the number of travelers exceeded 910,000. At the height of pandemic-related shutdowns in April, daily TSA passenger screenings fell below 100,000 on several occasions.

The Centers for Disease Control and Prevention has urged people to skip travel for Thanksgiving and to limit gatherings to those in the same household. The agency projected a grim increase in COVID cases and deaths due to the virus following the holiday.

Travelers have returned to the sky in greater numbers as the winter holiday season starts. Last weekend was the busiest since March, with more than three million people flying between Friday and Sunday.