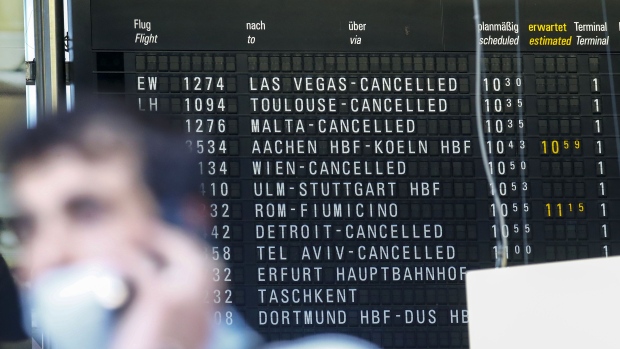 The disruptions come after thousands of flights were canceled over the Christmas holiday weekend and into early this week as winter storms combined with staffing shortages caused by the spread of coronavirus cases from the omicron variant.

“Like many businesses and organizations, we have seen a surge in the number of sick calls from omicron,” JetBlue said by email. To give customers time to make other plans, the New York-based carrier pared its schedule through Jan. 13.

While federal guidance reducing the isolation period for many people testing positive to five days from 10 is expected to help staffing, “we expect the number of COVID cases in the Northeast -- where most of our crew members are based –- to continue to surge for the next week or two,” JetBlue said.

The Transportation Security Administration said it screened 2.02 million people around the U.S. on Wednesday.

Atlanta was among the hardest hit for cancellations and delays Thursday morning, according to FlightAware. Heavy rains were developing in the Southeast and a flash flood warning was issued for the Atlanta area.

No relief is expected in the near term.

Heavy snow is expected in much of the West on Thursday, according to the National Weather Service, while snow and an icy mix are “expected to paint a swath of hazardous travel conditions New Year’s Day from the front range of the Rockies to the Midwest and Great Lakes.” More than 500 flights already have been canceled for Friday and more than 100 for Saturday.

Airlines probably won’t see much impact on earnings, said Cowen Inc. analyst Helane Becker. Most canceled flights will be rebooked and carriers may use larger planes to consolidate service, she said.

“The airlines are doing their best to accommodate passengers,” Becker said by email. “But as it affects earnings, we don’t think it’s going to be significant to fourth-quarter results.”