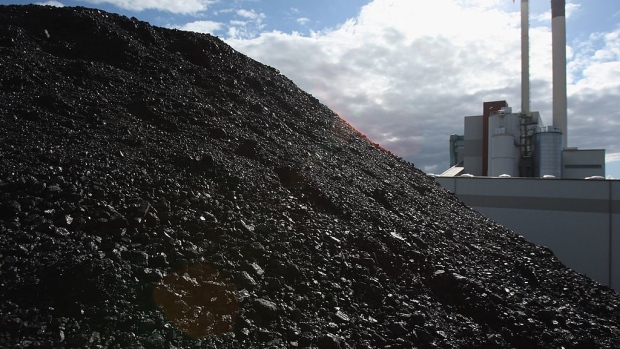 NEUMUENSTER, GERMANY - AUGUST 3: The coal and garbage burning power plant of Statdtwerke Nuemuenster stands behind a mound of coal August 3, 2007 in Nuemuenster, Germany. The plant, which formerly relied solely on coal, is now equipped with a specialized furnace that allows the plant to produce two-thirds of its energy with garbage, which it receives from a local garbage processing center. The center, known as a Mechanisch-Biologisch Abfallbehandlungsanlage (MBA), or Mechanical-Biological Waste Processing Center, converts 55% of the garbage it receives into high-energy fuel, which it then sends to the city's converted power plant. The plant's management cites the twofold environmental benefit of burning the garbage, namely that it prevents the emission of methane gas from the biodegradation of the garbage (methane gas is 21 times more potent at warming the earth's atmosphere than CO2), and the reduced CO2 emissions from burning the garbage rather than coal. (Photo by Sean Gallup/Getty Images) Photographer: Sean Gallup/Getty Images Europe , Photographer: Sean Gallup/Getty Images Europe

(Bloomberg) -- The U.S. and European Union have agreed to a plan to cut emissions of methane by about a third by the end of the decade as part of a diplomatic push to get other nations to take aim at the powerful planet-warming gas, according to people familiar with the effort.

The U.S. is asking other nations to join the “global methane pledge” -- an expected topic of discussion during a climate change forum President Joe Biden is convening on Friday. The meeting is timed to help build momentum before a United Nations-sponsored climate summit in Glasgow, Scotland, set to run Oct. 31 to Nov. 12.

Biden plans to unveil the methane pledge at the Glasgow meeting, according to an invitation he sent to Argentine President Alberto Fernandez that is posted on the presidential website.

“For the benefit of both present and future generations, I urge you to join me and our fellow leaders in doing our utmost to meet this fateful moment,” Biden wrote in the invitation, dated Sept. 8.

Under the U.S.-EU pledge, the nations are agreeing to pare methane emissions across the board, without singling out planned reductions from certain high-emitting sectors, such as oil and agriculture. The goal is a broad one-third cut in global methane emissions -- with countries that sign on pledging to do their part in achieving the target.

The Biden administration is working to recruit at least two dozen other countries to sign on to the pledge before the climate summit next month, said one of the people familiar with the matter.

The people all spoke on the condition of anonymity.

The Biden administration has been working on the methane pledge for months -- part of a strategy to build multilateral climate commitments that buttress nations’ Paris agreement pledges.

“We’re addressing this as a diplomatic imperative,” Rick Duke, senior director and White House liaison for the special presidential envoy for climate change, said in a forum on methane last month. “We cannot look to a single agreement in order to cut methane pollution with the speed and comprehensiveness that we require. It’s going to require a sustained diplomacy, sustained programmatic work, action by governments and industry spanning all these opportunities.”

The U.S.-EU agreement was previously reported by Reuters. The White House declined to comment on the report and the office of John Kerry, special envoy for climate, didn’t respond to a request for comment.

Representatives of the EU had no immediate comment but an EU official familiar with the matter confirmed the pledge is to be presented to the forum on Friday.

With the support of additional countries, the methane pledge would represent the first global political commitment to pare methane, amid increasingly urgent warnings that reductions of the greenhouse gas are essential to reduce near-term warming and avoid feedback loops that lock in climate changes.

“The science tells us we have vanishingly little time left to slow global warming before we start passing serious climate tipping points,” said Sarah Smith, director of the super pollutants program at the Clean Air Task Force. The forthcoming global methane pledge reflects what UN scientific panels and other bodies “say we must do to directly reduce methane and set ourselves on a pathway to limit global warming to 1.5°C.”

Methane is 84 times as potent a greenhouse gas as carbon dioxide during the two decades after it is first released and is thought to be responsible for at least a quarter of global warming.

The Biden administration is slated to propose later this month the most aggressive federal methane mandates yet for oil and gas wells, including hundreds of thousands that were drilled long ago but have so far escaped direct methane curbs. Biden’s Environmental Protection Agency also is expected to tighten Obama-era requirements for routine inspections and rapid repairs of leaking equipment at wells that are newly drilled or modified.