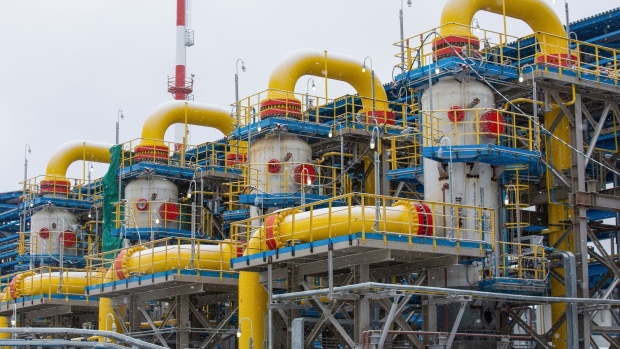 Filter separators at the Gazprom PJSC Slavyanskaya compressor station, the starting point of the Nord Stream 2 gas pipeline, in Ust-Luga, Russia, on Thursday, Jan. 28, 2021. Nord Stream 2 is a 1,230-kilometer (764-mile) gas pipeline that will double the capacity of the existing undersea route from Russian fields to Europe -- the original Nord Stream -- which opened in 2011. Photographer: Andrey Rudakov/Bloomberg , Bloomberg

(Bloomberg) -- The U.S. and Germany have completed a deal approving completion of the Nord Stream 2 pipeline, effectively ending a longstanding rift between the allies over German gas purchases from Russia, according to two senior State Department officials.

Under the agreement, Germany agrees to take action if Russia tries to use energy as a weapon against Ukraine, a decision that may mark a concession from Chancellor Angela Merkel, who had previously balked at making independent moves against the Kremlin over the gas pipeline that will run from Russia to Germany.

The deal puts an end to a decade-long U.S.-German feud over the project, which critics have argued would give Moscow too much leverage over European national security. Biden’s administration initially suggested it would try to halt construction but later shifted its approach, saying doing so would be a long shot and only sour relations with the German government.

If Russia attempted to use energy as a weapon or commit aggression against Ukraine, Germany would take action itself while also pressing for measures at the European level, including sanctions to limit Russia’s energy exports, according to the accord.

“This is a bad situation and a bad pipeline, but we need to protect Ukraine,” Victoria Nuland, undersecretary of state for political affairs, told a Senate Foreign Relations Committee hearing on Wednesday. Ukraine’s President Volodymyr Zelenskiy has been invited to visit the White House on Aug. 30, White House Press Secretary Jen Psaki said Wednesday.

While the accord raises the possibility of limiting Russian gas flows, the language is disappointing critics -- including many U.S. lawmakers -- who say that the administration hasn’t done enough to stop the pipeline, which was more than 90% complete when President Joe Biden came into office.

Senator John Barrasso, a Wyoming Republican, told Nuland that the pipeline puts a “stranglehold” on Europe. “Protecting this Russian trap is not in our national security interest,” he said.

Republican Senator Ted Cruz of Texas called the accord with Germany a “complete and total capitulation by President Biden to Putin.”

Critics had been looking for specific language under which Germany would vow to shut off the flow of gas through Nord Stream 2 in the event that Russia sought to exert undue influence on Ukraine. But Germany has long resisted such a threat, saying it would only further politicize a project that Merkel insists is purely business related.

The agreement would commit Germany to use leverage to extend Ukraine’s gas transit agreement with Russia after it expires in 2024. Germany will name an envoy “soon,” the officials said.

State Department spokesman Ned Price told reporters in Washington Tuesday that “the Germans have put forward useful proposals, and we have been able to make progress on steps to achieve that shared goal, that shared goal being to ensure that Russia cannot weaponize energy.”

Kremlin spokesman Dmitry Peskov didn’t respond Tuesday to a request for comment on the emerging U.S.-German accord. The Kremlin has long rejected allegations that it uses energy supplies as a political weapon and has defended Nord Stream 2 as a purely commercial project. Russia has said it would consider using Ukraine to supply gas to Europe after the current transit contract expires but only if Kyiv offers attractive terms.

The progress comes after months of negotiations and a visit by Merkel to the White House last week. In a joint news conference, the two leaders said they are in agreement on deterring Russian President Vladimir Putin from abusing the pipeline for political gains, even as their assessments differ on the pipeline’s intent.

“Chancellor Merkel and I are absolutely united in our conviction that Russia must not be allowed to use energy as a weapon to coerce or threaten its neighbors,” Biden said. “We will be actively acting should Russia not respect this right of Ukraine that it has as a transit country.”

In her remarks, Merkel said, “We have a number of instruments, which for the most part are not on the German but on the European level, that we can implement” and that Germany was “in talks with our European friends.”

“Can we make something out of a very bad hand that we inherited?” Secretary of State Antony Blinken said last month in an interview with the German publication Der Spiegel. “Because yes, President Biden has long said that the pipeline is a bad idea, that it will potentially be a tool of Russian economic coercion and strategic coercion, a tool that can be used not only against Ukraine but indeed Europe as a whole to the extent it increases dependence on Russian gas.”

(Updates with details of the accord starting in fifth paragraph.)