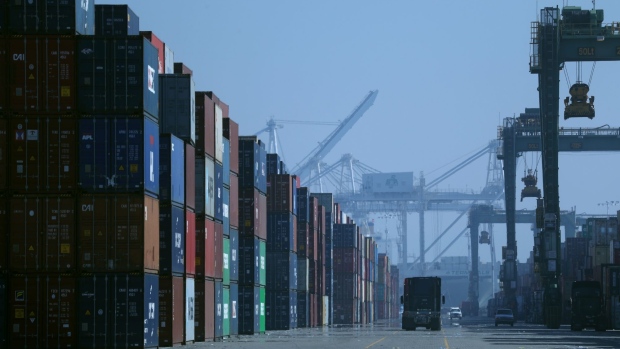 The World Trade Organization (WTO) says that global flows of goods across borders is on track to fall to the lowest level in ten years as tariffs and trade tensions continue to impact imports and exports. , (Photo by Justin Sullivan/Getty Images)

The annual deficit in goods and services decreased for the first time in six years, narrowing 1.7 per cent to US$616.8 billion, Commerce Department data showed Wednesday. The December gap rose from the prior month to US$48.9 billion, wider than the median estimate of economists, as oil imports from Canada jumped.

While Trump frequently cites the deficit as evidence of the failure of his predecessors’ trade policies -- even though most economists don’t dwell on the indicator -- the gap remains more than 20 per cent wider than before he became president. That reflects steady gains in American consumer spending, which drives imports.

The annual merchandise-trade deficit with China -- the principal target of Trump’s trade war -- narrowed 17.6 per cent to US$345.6 billion after hitting a record in 2018. Imports from the country slumped 16.2 per cent, exceeding the drop in 2009 during the global financial crisis, while shipments to China declined 11.3 per cent, the biggest drop since at least 2003.

That pushed China down to third place among America's top trading partners for goods in 2019, as Mexico vaulted to the top spot, slightly ahead of Canada. The merchandise deficits with Mexico and the European Union hit records, while the U.S. surplus in services declined by 4% to $249.2 billion as imports gained.

Even with the trade tensions, oil was a chief force behind the full-year deficit narrowing. Petroleum imports dropped $31.4 billion to $193.9 billion while exports increased, narrowing the full-year gap in such products to a record-low US$13.7 billion. On a monthly basis, the U.S. has been a net exporter since September.

The non-petroleum goods deficit was US$839.2 billion, a record high.

The U.S. and China last month signed the first phase of a trade agreement that's supposed to see the Asian nation buying an extra $200 billion of American goods over the next 24 months, the culmination of almost three years of acrimonious talks that have roiled markets.

The coronavirus threatens to affect the target that many thought was lofty before the outbreak, and officials in Beijing are hoping Washington will agree to some flexibility on pledges in their deal, people familiar with the matter said earlier this month.

On Jan. 29, Trump signed a new trade pact with Canada and Mexico into law, extending the life of the trading bloc created by Nafta in the 1990s with some significant updates. The White House is now turning its attention to scrutinizing trade links with other nations and regions including the U.K., Africa and the European Union, with whom relations started to sour in 2018 when the Trump administration invoked national-security considerations to impose tariffs on steel and aluminum from Europe.

Trump said Tuesday in his State of the Union address that his tariff strategy with China has worked. The agreement with China will protect U.S. workers and intellectual property, open markets and “bring billions and billions of dollars into our Treasury,” he said.

Under the tariffs, U.S. companies importing goods from China are paying the levies that flow to the Treasury. That forces firms to decide how to take a hit to profits, shift supply chains or pass along price increases to customers.

As a share of the economy, the overall trade gap narrowed to 2.9 per cent of gross domestic product from three per cent in 2018. It's still significantly smaller than in the decade before the last recession, when it approached six per cent.

For the full year, exports fell 0.1 per cent to US$2.5 trillion as shipments of civilian aircraft declined amid the grounding of Boeing Co.'s 737 Max plane, while sales of autos, consumer goods and petroleum gained. Imports fell 0.4 per cent to US$3.12 trillion on lower purchases of crude oil, computer accessories and telecommunications equipment.