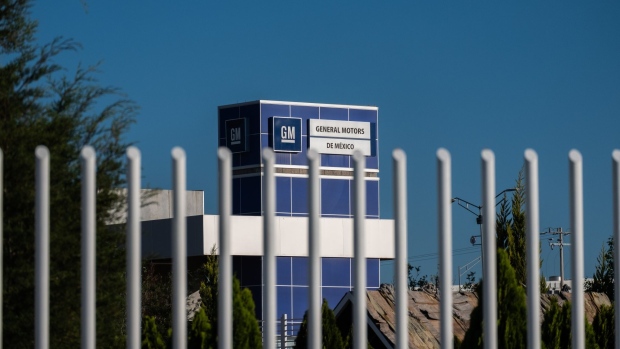 Signage is displayed on a closed General Motors Co. plant in Villa de Reyes, Mexico, on Monday, April 13, 2020. The number of confirmed cases in the coronavirus outbreak in Mexico has risen 7.6% from yesterday to 5,014. Photographer: Mauricio Palos/Bloomberg , Bloomberg

(Bloomberg) -- The U.S. asked Mexico to review alleged denial of workers’ rights at a General Motors Co. truck plant in central Mexico, the first time Washington is self-initiating a labor dispute under the new trade pact between the countries.

United States Trade Representative Katherine Tai has asked Mexico to review whether employees at the facility in Silao, Guanajuato, are being denied the right of free association and collective bargaining, the USTR said in a statement released early Wednesday.

“Using USMCA to help protect freedom of association and collective-bargaining rights in Mexico helps workers both at home and in Mexico, by stopping a race to the bottom,” Tai said. “It also supports Mexico’s efforts to implement its recent labor-law reforms. I commend the Mexican government for stepping in to suspend the vote when it became aware of voting irregularities.”

Mexico’s Labor Ministry in April said it shut down a union-led vote at the plant after discovering unused ballots had been destroyed. When it asked the union to deliver for inspection the votes that had already been cast -- about half of the 6,494 unionized workers had voted -- the syndicate refused, according to a preliminary report by the ministry.

On Tuesday, Mexico said it will have the union redo the labor vote and pledged to guarantee proper conditions for a free and secret election. The ministry said it would reinforce observation mechanisms and other measures to impede the company, the union, or outside personnel from meddling in the vote.

The Biden administration’s trade policy is focused on workers and enforcing existing commitments by the U.S.’s partners. Democrats and American labor unions made strong worker rules and enforcement mechanisms for Mexico a key demand to win their support for the U.S.-Mexico-Canada Agreement that went into force last July.

Under the USMCA’s rapid-response labor mechanism, the first step is for the U.S. to submit a request that Mexico review whether there is a denial of rights and attempt to address any issues it finds, the USTR said. If the countries are unable to agree that the issue has been resolved, the U.S. may request the establishment of a so-called rapid-response labor panel to determine whether there has been a denial of collective-bargaining rights.

Tai has directed the Treasury Department to suspend the final settlement of customs accounts related to entries of goods from GM’s Silao facility.

On Tuesday, three U.S. lawmakers wrote to GM Chief Executive Officer Mary Barra, asking her for details on the auto company’s role in what happened and whether the company will commit to ensuring future votes are independently verified.

The manufacturer respects and supports the rights of its employees to make a personal choice about union representation, and will cooperate with the U.S. government and the Mexican Labor Ministry to protect the integrity of the process, it said in an emailed response to questions.

“GM condemns violations of labor rights and actions to restrict collective bargaining,” it said. “We do not believe there was any GM involvement in the alleged violations or that any government-approved inspectors were denied access to the facility, and have retained a third-party firm to conduct an independent and thorough review.”

The U.S. action follows information they received through a confidential hotline and is meant to complement Mexico’s efforts on the matter, not implicate the Mexican government in any wrongdoing, a USTR official told reporters. Mexico will have 10 days to respond.

The Biden administration has reached out to GM on the issue, another USTR official said, without providing details.

The GM case is the first initiated by Washington. In another USMCA first, the largest U.S. labor union and other groupd on Monday said they lodged a complaint over working conditions at another auto-parts factory in Mexico, the debut case to test whether enforcement provisions in a new trade agreement can help to improve working conditions.