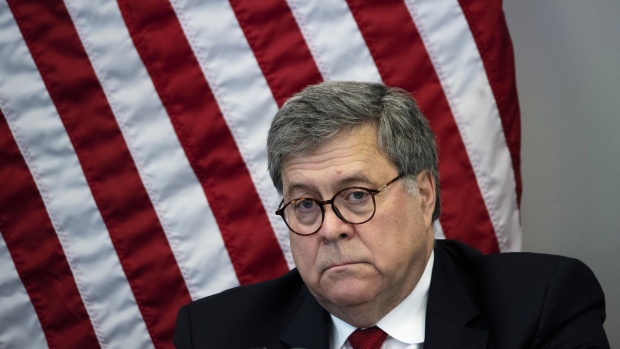 Apple Inc. and the U.S. government are once again at odds over access to iPhones involved in a terrorist attack, putting the world’s largest technology company under renewed pressure to weaken privacy features that have become a key selling point.

U.S. Attorney General William Barr slammed Apple on Monday for not helping investigators unlock iPhones belonging to the perpetrator of a Dec. 6 terrorist attack at a Navy base in Florida.

The shooter, Mohammed Saeed Alshamrani, had two iPhones, and the FBI quickly got court approval on probable cause to search the devices, Barr said in prepared remarks discussing the government’s investigation. The attacker shot one of the phones, but the FBI was able to fix the device, he said. The second phone was also damaged but fixed. Alshamrani died during the incident, and the handsets were locked with passwords and encrypted, so the FBI can’t access information on the devices.

“It is very important to know with whom and about what the shooter was communicating before he died,” but the devices are “engineered to make it virtually impossible to unlock them without the password,” Barr said. “We have asked Apple for their help in unlocking the shooters iPhones. So far Apple has not given us any substantive assistance.”

Tech companies and governments have clashed for years over balancing law enforcement access and user privacy. The latest encryption technology used on iPhones and other smartphones has increased this tension because the devices have become a lot harder for outside experts to hack into.

“This situation perfectly illustrates why it is critical that investigators be able to get access to digital evidence once they have obtained a court order based on probable cause,“ Barr said on Monday. “We call on Apple and other technology companies to help us find a solution so that we can better protect the lives of Americans and prevent future attacks.”

Apple addressed this last week in a statement. “When the FBI requested information from us relating to this case a month ago we gave them all of the data in our possession and we will continue to support them with the data we have available,“ an Apple spokesman said at the time.

Apple regularly responds to warrants by giving investigators access to data that is stored on its servers, such as users’ iCloud account information. However, the company has refused in the past to help authorities unlock iPhones to get on-device data. It has also argued that iPhone security and encryption mean that it can’t access such information even if it wanted to.

When Barr said Apple hasn’t provided substantive assistance, he was referring specifically to help accessing the data on the phone, Justice Department spokeswoman Kerri Kupec said. “They have yet to tell us whether they have the ability to get into the phones themselves,” she added. Apple didn’t respond to requests for comment on Monday.

In 2016, the FBI asked Apple to unlock an iPhone belonging to the shooter behind the San Bernardino terrorist attack by building a software backdoor. Apple refused to unlock the phone, and Apple Chief Executive Officer Tim Cook said building a backdoor into the phone was the ”software equivalent of cancer.”

After several weeks of publicly acrimony, the government backed off, saying it found a way to hack into the device without Apple’s help. This time, it’s unclear if the government will be able to break into the iPhones. Since the 2016 incident, Apple has also worked to improve its iPhone encryption. That means that as Apple makes its devices more secure, it also makes itself more prone to situations like this one.