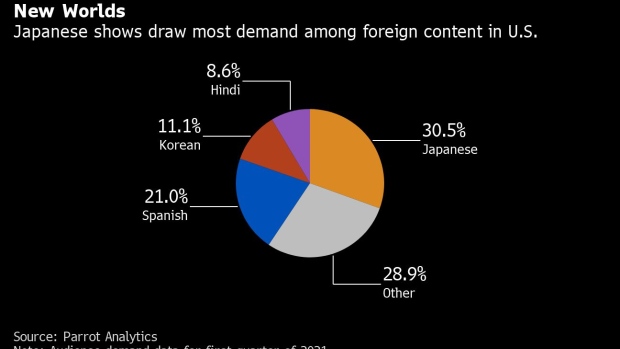 (Bloomberg) -- U.S. viewers’ interest in Japanese anime and live-action content has soared in past year, according to a report, as foreign shows find more demand from audiences amid the Covid-19 pandemic.

Interest in anime programs gauged from audiences’ behavior online was up 33% in the first quarter from just a year ago in the U.S., according to a report by Los Angeles-based Parrot Analytics, a startup that measures audience demand for television content shown on the internet, and market research company Global Connects.

American viewers were also most interested in Japanese content compared to other foreign language offerings, accounting for roughly one-third of demand over the past six quarters, according to the report. It topped Spanish-language content, at 21%, and Korean programming, at 11%.

The market for foreign-produced content in the U.S. is growing amid the Covid-19 pandemic, and some shows like Netflix’s “Alice in Borderland” have found new international audiences with people largely stuck at home or unable to go to movie theaters. For entertainment giants now battling it out in the field of streaming services, Japan’s anime content has long been identified as a way to draw new subscribers.

Demand for live-action Japanese shows is being fueled by people looking for more programming after becoming familiar with anime, the report said. Taiki Sakurai, Netflix’s chief anime producer, said in an interview in March that half of the company’s global subscribers had watched at least one anime title -- and it plans to release 40 more this year.

Japan is home to old and new anime titles whose value with audiences internationally likely has yet to be fully unlocked. In the past pandemic year, a film based on the “Demon Slayer: Kimetsu no Yaiba” franchise broke Japanese box office records. Its television series is available to stream internationally on multiple services, and the movie has made $37.1 million in U.S. theaters, according to Box Office Mojo.

Other entertainment giants are also getting in on the action. Last year, Sony made a $1.2 billion bid for anime streaming service Crunchyroll from AT&T Inc., with the deal currently under review by antitrust regulators. In 2019, HBO Max bought the U.S. distribution rights for a trove of films by famed Japanese anime creator Hayao Miyazaki including hit “Princess Mononoke.”