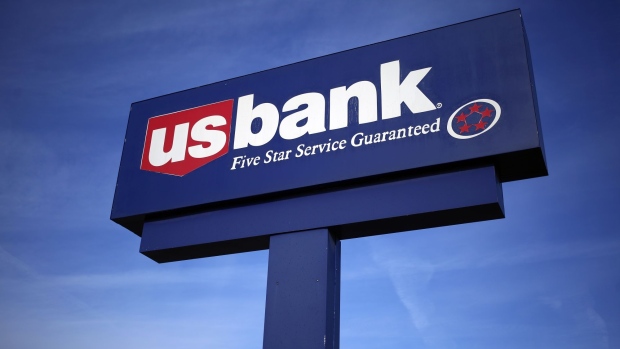 US Bancorp signage stands on display outside a bank branch in Lexington, Kentucky, U.S., on Thursday, Jan. 9, 2020. US Bancorp is scheduled to release earnings figures on January 15. , Bloomberg

U.S. Bancorp agreed to buy Mitsubishi UFJ Financial Group’s U.S. regional bank for about US$8 billion, expanding on the West Coast as consolidation in the finance industry intensifies.

The price for MUFG Union Bank NA includes US$5.5 billion in cash and about 44 million shares of U.S. Bancorp common stock, according to a statement Tuesday. The agreement excludes MUFG Union Bank’s global corporate and investment bank and some of the company’s middle- and back-office functions.

Large regional lenders such as U.S. Bancorp and PNC Financial Services Group Inc. are bulking up through acquisitions and by purchasing foreign firms’ U.S. units, an attempt to compete with the retail-banking businesses of Wall Street giants. JPMorgan Chase & Co. and Bank of America Corp. have been moving into new states and are spending billions annually on digital offerings. PNC completed its US$11.6 billion takeover of Banco Bilbao Vizcaya Argentaria SA’s U.S. business in June.

The acquisition will make Minneapolis-based U.S. Bancorp California’s fifth-largest bank by deposits, a jump from No. 10 currently, according to the statement. It adds more than 1 million customers and about 190,000 small-business clients.

“The acquisition of MUFG Union Bank underscores our commitment to strengthen and grow our business on the West Coast, make investments to serve customers and local communities and enhance competition in the financial-services industry,” Andy Cecere, U.S. Bancorp’s chief executive officer, said in the statement.

MUFG, which acquired Union Bank in 2008 for about US$3.5 billion, had been weighing a sale, Bloomberg News reported last week. MUFG will hold a minority stake of approximately 2.9 per cent in the U.S bank when the deal is completed. MUFG said in a presentation that the total transaction is worth about US$17.6 billion, including US$9.6 billion from dividends or share buybacks ahead of the sale.

Some U.S. bank mergers face headwinds in Washington, where the Biden administration has a new appetite for stepped-up antitrust enforcement. The Federal Trade Commission’s new chair, Lina Khan, has signaled the agency is going to take a tougher stance on approving mergers and scrutinizing deals that are coming up for review.

The Japanese bank’s U.S. unit on Monday received a cease and desist order from the Office of the Comptroller of the Currency, which cited the bank’s “unsafe or unsound practices” regarding technology and operational risk management, as well as noncompliance with security standards.

U.S. Bancorp “evaluated and incorporated these regulatory concerns into all aspects of the deal process,” it said in the statement. “The company believes it can successfully remediate the issues applicable to MUFG Union Bank in connection with the transaction, and that the order will not restrict U.S. Bancorp’s ability to operate and grow its business as planned.”

The deal is expected to be completed in the first half of 2022, according to the statement.