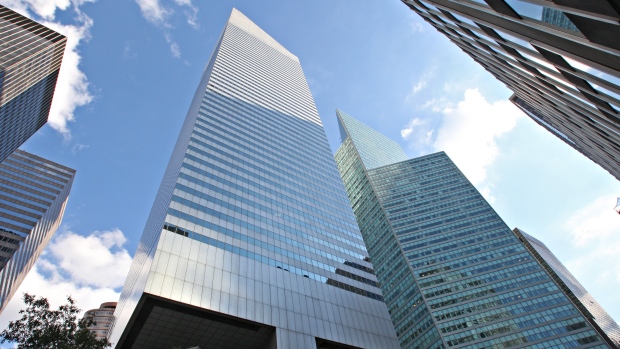 Earlier, JPMorgan CEO Jamie Dimon was bullish on the U.S. and global economy, but flagged “increasing economic and geopolitical uncertainties, which at some point in the future may have negative effects on the economy.”

The bank’s third-quarter results look “nice and steady,” which bodes well for the U.S. banking industry, Opimas CEO Octavio Marenzi writes in a note. “Going into this earnings cycle, there were some concerns that interest margins would start to deteriorate, and that revenues from trading would suffer. Neither of these fears was borne out by JPMorgan’s earnings announcement.”

Traders turned to the US$30 billion Financial Select Sector SPDR Fund, known by its ticker XLF. Investors traded close to 380,000 shares in pre-market trading Friday morning, more than double the average pre-session volume for the past year. XLF has climbed as high as 1.9 percent today, the most intraday in almost a month before paring some of the gains.

Wells Fargo and JPMorgan mortgage banking trends were “a bit stronger” than KBW expected, analyst Bose George writes in a note. George flags improved gain-on-sale (GoS) margins. Origination volumes were mixed, with Wells Fargo down 8 per cent percent in the quarter, and JPMorgan up 5 percent, versus consensus expectations of down 1 per cent to 2 per cent.

The good news in the banks’ quarterly reports may not be enough to prompt a lasting rally, or to make up for underperformance versus the broader market.

After the recent bank share selloff, “investors are looking for reassurance that 2019 estimates are intact,” Goldman Sachs analyst Richard Ramsden writes in a note. For JPMorgan, a continued credit tailwind provides support for forward estimates, as does a better net interest margin and solid operating leverage discipline. Even so, Ramsden warns, “the on-going debate around ‘where are we in the credit cycle’ means that we doubt investors will pay for lower credit costs.”

Another troubling sign? Regional banks are underperforming, and PNC Financial Services Group Inc., which also reported results, fell as much as 5.8 per cent. While PNC’s fee-driven earnings per share beat, there are questions about its expense outlook and weaker loan growth, Morgan Stanley’s Betsy Graseck writes in a note.