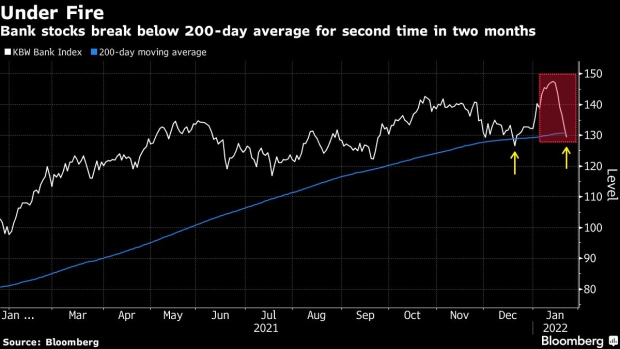 (Bloomberg) -- U.S. bank stocks are headed for their worst losing streak in a year, burning investors who bought shares on expectations that the Federal Reserve raising rates for the first time since 2018 would boost the sector.

The KBW Bank Index fell as much as 3.8% on Monday, extending its recent slump to a sixth consecutive day since hitting a record high earlier this month, its longest run of losses since January 2021. Over that stretch, the gauge has declined more than 12% to fall into correction territory and has fallen below its 200-day moving average for the second time in two months.

“While we aren’t attempting to call a market bottom, we do view at least a substantial portion of the recent selloff in financial stocks as transitory, and largely fear-based as investors prepare for the Fed to raise interest rates and wonder whether it will negatively impact the economy,” said KBW analyst Christopher McGratty.

Banking shares have come under significant pressure following a record start to the year as fourth-quarter earnings failed to deliver on high expectations and a slew of lenders warned that expenses will continue to climb this year. While some analysts believe that the share price reaction has been overblown, others have warned that the group is going to remain under pressure this year despite the prospects that the Fed could raise rates between three and four times in 2022.

Adding to the selling pressure is a wave of negative sentiment that has overtaken the broader stock market as investors dump risk assets ahead of Wednesday’s Fed meeting and as tensions continue to grow between Russia and Ukraine. Bond yields have also retreated in recent days, with the U.S. 10-year Treasury yield falling for four straight days to hit 1.72%.