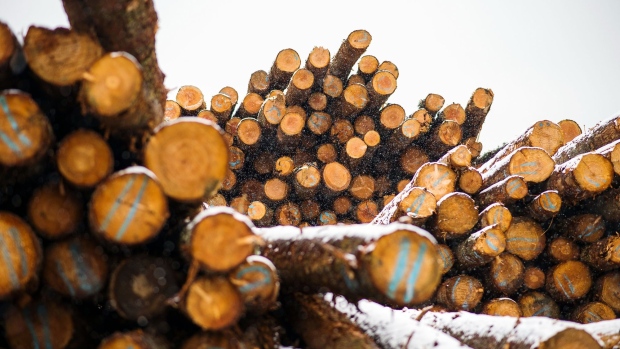 (Bloomberg) -- Supply Lines is a daily newsletter that tracks Covid-19’s impact on trade. Sign up here, and subscribe to our Covid-19 podcast for the latest news and analysis on the pandemic.

Generations of seedlings will have been planted, grown into trees and harvested for planks and boards by the time the U.S.-Canada softwood lumber dispute is fully resolved -- if it’s ever resolved.

The U.S. said Monday it’s considering options including an appeal of a World Trade Organization dispute ruling that backed Canada’s claim the U.S. imposed unfair tariffs on its imports of softwood lumber. That could mean there’s no end in sight in a dispute whose origins date back to the early 1980s.

“This flawed report confirms what the United States has been saying for years: the WTO dispute-settlement system is being used to shield non-market practices and harm U.S. interests,” U.S. Trade Representative Robert Lighthizer said in a statement following the ruling. The statement said the U.S. is “evaluating options in response to the panel report.”

WTO rules permit the U.S. to appeal the ruling anytime in the next 60 days. If the Trump administration lodges an appeal, it will deny tariff relief to a handful of Canadian lumber companies, including: Canfor Corp.; Resolute FP Canada; Tolko Marketing & Sales Ltd. and Tolko Industries Ltd.; West Fraser Mills Ltd. and JD Irving Ltd.

That’s because the WTO appellate body no longer has enough members to issue a final ruling that would require the U.S. to modify its tariffs.

On Monday a panel of three WTO experts largely backed Canada’s complaint that the Trump administration miscalculated the way the Canadian government subsidizes its timber companies and imposed unfairly high tariffs, according to a ruling published on its website.

The WTO said the U.S. Commerce Department erred in 2017 when it imposed average countervailing duties of 14.25% and anti-dumping duties of 6.58% on Canadian softwood lumber, siding, flooring, and other coniferous wood products.

The USTR said the ruling “applies an erroneous appellate-body interpretation and would shield Canada’s massive lumber subsidies from U.S. action imposing countervailing duties to support the U.S. softwood lumber industry and its workers.”

The U.S. has already appealed one adverse WTO ruling since December, when the appellate panel lost a quorum of members to deliberate new trade rulings. Washington precipitated the paralysis of the appeals process last year after it argued the panel had exceeded its mandate by ruling on matters outside of its remit.

The EU, Canada, China and various other WTO members have since established an interim arbitration system to help fully settle trade disputes among themselves until the U.S. agrees to restart the appointment process for new appellate body members.

The case is Canada’s ninth WTO dispute to challenge U.S. trade restrictions on Canadian softwood lumber imports in a decades-long disagreement between the two nations. The U.S. has long claimed that its northern neighbor unfairly subsidizes lumber production.

Canada is the largest foreign supplier of softwood lumber to the U.S., which imported $5.7 billion worth of it from Canada in 2016, according to the U.S. Department of Commerce.