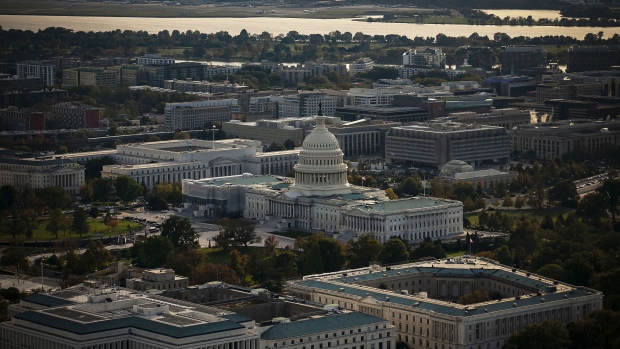 The U.S. Capitol is seen in this aerial photograph taken above Washington, D.C. , Bloomberg

Explore what’s moving the global economy in the new season of the Stephanomics podcast. Subscribe via Apple Podcast, Spotify or Pocket Cast.

The U.S. budget deficit expanded in November, reflecting an increase in spending tied to the timing of some federal payments.

The monthly gap increased to US$208.8 billion in the month, 1.9 per cent above the prior year’s level, the Treasury Department reported on Wednesday. Spending increased 5.6 per cent, with outlays rising for agriculture, defense, social security, and Medicaid. Receipts jumped 9.3 per cent on increases in payroll taxes and individual income payments.

The non-partisan Congressional Budget Office estimated earlier this week that the November budget gap would have been about US$50 billion smaller if not for a calendar quirk. Similar to last fiscal year, some December payments were moved up to November because Dec. 1 fell on a Sunday.

The budget under President Donald Trump has some deficit hawks concerned about its sustainability, arguing that it risks investors losing confidence in the U.S. to repay its debts over the long term. At the same time, Treasury yields remain historically low despite the rising budget deficit, which includes the impact of Trump’s tax cuts package that the CBO estimates will cost US$1.9 trillion over the next decade.