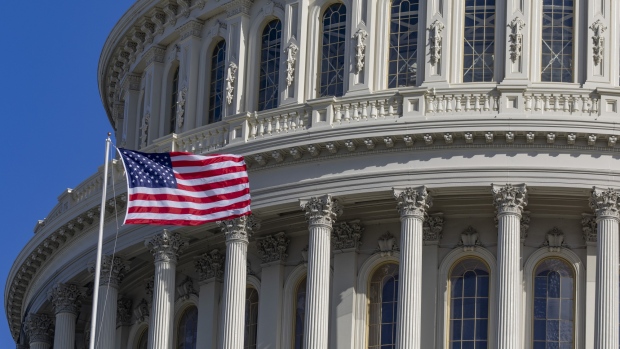 An American flag flies on the U.S. Capitol Building during a partial government shutdown in Washington, D.C., U.S., on Sunday, Jan. 20, 2019. President Donald Trump made his first substantive offer of the government shutdown aimed at peeling off moderate Democrats and shifting blame with an American public that so far overwhelmingly holds him responsible for the month-long impasse. , Bloomberg

The U.S. budget deficit widened to US$738.6 billion in the first eight months of the fiscal year, a US$206 billion increase from a year earlier, as expenditures climbed faster than revenue.

The shortfall was 38.8 per cent more than the same period a year ago, the Treasury Department said in its monthly budget review released on Wednesday. So far in the fiscal year that began Oct. 1, a revenue increase of 2.3 per cent hasn’t kept pace with a 9.3 per cent rise in spending.

The budget gap has continued to increase under President Donald Trump, driven by a combination of Republican tax cuts that will add up to about US$1.5 trillion over a decade, and increased government spending. The deficit is forecast to reach US$897 billion this fiscal year, from US$779 billion last year, and rise to more than US$1 trillion in fiscal 2022, according to the Congressional Budget Office.

The White House has said the tax cuts will pay for themselves by creating more revenue through faster and sustainable economic growth.

As Trump ratcheted up the trade war with China with higher levies on imports from the Asian nation, the U.S. recorded US$4.9 billion in customs duties in May, bringing the total to US$44.9 billion in the first eight months of the fiscal year -- almost double the same period a year earlier.

In May, the fiscal deficit increased to US$207.8 billion, up 41.5 per cent from the same month last year. The forecast in a Bloomberg survey of economists was US$202.5 billion.