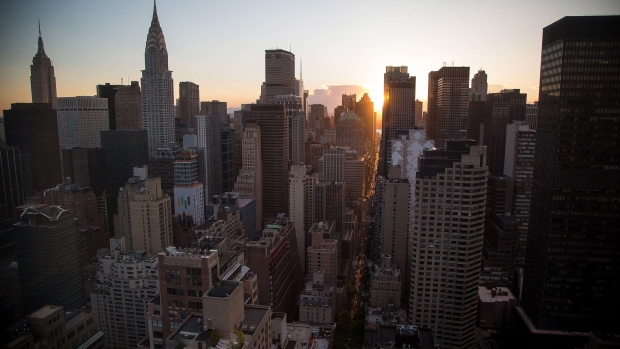 A view of midtown is seen from the penthouse apartment at the 50 United Nations Plaza building in New York, U.S., on Tuesday, June 7, 2016. About 3,574 newly built apartments will reach the market in 2016, according to brokerage Corcoran Sunshine Marketing Group. , Bloomberg via Getty Images

(Bloomberg) -- U.S. business debt exceeded that of households for the first time since 1991, a potential warning sign for the economy as corporate investment softens.

Nonfinancial companies boosted debt at a faster 5.7% annual pace in the third quarter to a total outstanding $15.987 trillion, while household borrowing slowed to a 3.3% rise to reach $15.986 trillion, Federal Reserve data showed Thursday. Federal government debt climbed 10.4%, the most since early 2018, to $18.9 trillion.

With the record-long expansion in its 11th year, Fed policy makers have indicated in recent months that they’re watching the corporate debt situation closely. Chairman Jerome Powell said in October that “leverage among corporations and other forms of business, private businesses, is historically high. We’ve been monitoring it carefully and taking appropriate steps.”

Powell also said at the time that “in the aggregate, the household sector is in a very good place.”

U.S. stocks rose at a slower pace in the third quarter as threats of additional tariffs on China followed by more upbeat trade news whipsawed investors. Households’ holdings of real estate, a key source of wealth, rose to $32.9 trillion in the third quarter from $32.7 trillion as low mortgage rates, steady demand and an inventory squeeze continued to push up home values.

The value of equities directly and indirectly held by households and nonprofit groups eased to $30.3 trillion from $30.5 trillion in the prior quarter.

Consumer credit expanded an annualized 5.1% in the third quarter, while mortgage debt increased at a 2.7% pace.