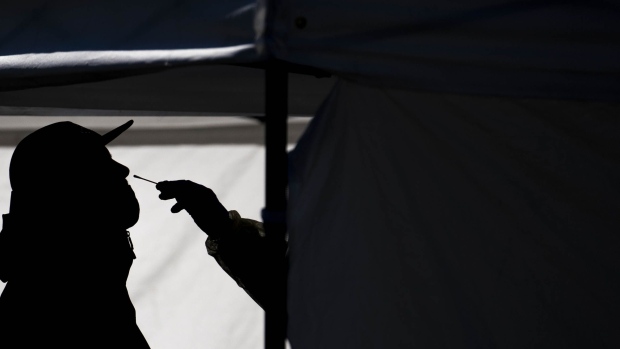 A healthcare worker administers a test at a Covid-19 testing facility outside the Hillcrest Recreational Center in Washington, D.C., U.S., on Tuesday, Nov. 24, 2020. The world is bracing for a new wave of Covid-19 infections, as the coronavirus pandemic has infected more than 59.4 million people and killed more than 1,400,000 globally since late January. Photographer: Sarah Silbiger/Bloomberg , Bloomberg

Surging cases in the Midwest helped push the number of daily U.S. infections to their highest in more than two weeks as the nation’s vaccination push regains pace. Canada’s Prime Minister Justin Trudeau said any adult who wants to be vaccinated can be fully inoculated by the end of summer.

Chancellor Angela Merkel’s governing coalition agreed on proposed nationwide rules for lockdowns and curfews in a bid to force compliance by some regional governments. European Union officials said the bloc is overcoming its vaccine supply problem.

Vaccines are in shorter supply in India, as the world’s second most populous country confronts a new viral wave.

The coronavirus variant first discovered in South Africa may be more likely than other strains to “break through” and reinfect people who had two doses of the Pfizer/BioNTech vaccine, according to an Israeli study released Saturday.

The study, by Tel Aviv University and the nation’s largest health care provider, Clalit, cautioned that the variant’s presence in Israel is very low. The study has not been peer reviewed.

Canada’s Prime Minister Justin Trudeau on Saturday said any adult in the country who wants to be vaccinated can be fully inoculated by the end of summer.

“We’re on track to meet our commitment that every Canadian who wants to will be fully vaccinated by the end of the summer,” he said at a speech. The government’s original goal was to vaccinate every citizen by the end of September.

Almost a quarter of Covid-19 vaccine doses distributed across the U.S. haven’t been administered, according to the Centers for Disease Control and Prevention.

While the CDC data don’t specify reasons, health officials have expressed concern about distribution equity and vaccine hesitancy, notably among rural and minority populations. Of some 233 million doses delivered nationwide, 179 million, or about 76%, were reported administered as of Friday.

The CDC says some vaccine will always be kept back to maintain inventory, including for second shots. Alabama, Alaska, Georgia, Mississippi and Wyoming have the lowest rates of administering first doses they have in hand.

Peter D. Banko, chief executive officer of Centura Health, said in a statement Friday night the decision was based both on the reduced shipments of the J&J vaccine from the federal government as well as 11 reported reactions at one vaccination site. Governor Jared Polis and the U.S. Centers of Disease Control said they looked into the reactions -- which included dizziness and nausea -- and determined there was no reason for concern.

Centura Health said the J&J vaccine is “safe and effective” and that it will continue to use it in doctors’ offices and ambulatory care clinics.

Weekly Covid-19 cases in 10 U.S. metro areas increased the fastest in Minneapolis, home to companies such as 3M Co. and Target Corp., according to data through Thursday compiled by the Centers for Disease Control and Prevention.

Cases increased 27% in the Minneapolis area, followed by rises of more than 20% in Grand Rapids, Michigan, and Detroit. Adjusted for population, new cases over the seven-day period rose the most in Detroit, Grand Rapids and Buffalo, New York. Minneapolis ranked sixth by that measure.

Italy reported 17,567 new coronavirus cases Saturday, 17% less than than 7 days ago in another sign the outbreak is slowing in the original epicenter of the pandemic in Europe.

Pressure on hospitals is decreasing with Covid-19 patients falling for a fourth consecutive day.

Italy will ease lockdown restrictions in most regions, including the one around Milan, from April 12. All retail businesses will be allowed to open, and people will be given more freedom to move around within their municipalities.Schools will reopen with some limitations. Bars and restaurants however will remain operating only for takeout orders and travel to other regions will still be mostly banned.

Chancellor Angela Merkel’s governing coalition agreed on proposed nationwide rules for lockdowns and curfews in a bid to force compliance by some regional governments. Hot-spot designations would be based on per capita infections at the county level, according to the draft law seen by Bloomberg on Saturday.

Merkel’s biggest hurdle is parliament’s upper house, where her governing parties lack a majority. Germany hospitals have come under strain after Covid-19 infection rates began rising in February, though vaccinations have picked up and reached daily records this week.

A divided U.S. Supreme Court eased California’s curbs on at-home religious services, adding to a string of orders that have freed worshipers from state and local restrictions designed to stem the Covid-19 pandemic.

The U.S. added almost 81,000 new cases Friday as the virus spreads fast in pockets around the nation, especially in the Midwest, according to data compiled by Johns Hopkins University and Bloomberg. The seven-day average has risen for five consecutive weeks.

Another 962 deaths were reported Friday, down for the second day, the data show, amid a general decline in fatalities. The U.S. recorded 4 million vaccine doses on Friday, as the pace picked up again after the Easter and Passover holidays, according to the Bloomberg Vaccine Tracker.

Italy’s biggest industrial lobby group cut its forecast for economic growth after a surge in infections in the country earlier this year.

Confindustria now sees Italy’s economic growth at 4.1% this year, 0.7 percentage points below its October forecast, after the health crisis led to a weaker than expected performance in the final quarter of 2020 and first quarter of 2021. It said the new forecast hinges on progress in vaccinations in Italy and the rest of Europe.

A Norwegian study into blood clots and abnormally low levels of platelets in five people who were given the AstraZeneca vaccine for Covid-19 has found that their condition was a vaccine-induced syndrome, according to an article in the New England Journal of Medicine.

“By providing a link between thrombosis and the immune system, these results strengthen the view that vaccination may have triggered the syndrome,” the article cited the study as saying.

Denmark and Norway are avoiding use of the Astra vaccine even though it’s been approved for use there, saying they need more time to review the risks. Sweden and Finland are only offering it to people over the age of 65.

Europe could have fully vaccinated 70% of adults before the U.K. reaches its own target of one dose for all over-18s by the end of July, Thierry Breton, the European commissioner leading Brussels’ vaccine task force, said in an interview with the Guardian.

Europe was expecting 360 million doses from five manufacturers in the second quarter, with European factories set to produce 200 million shots a month by September for an overall capacity of 2 to 3 billion by year end. The “extremely rapid” increase in European production capacity should allow the EU’s 27 nations to compensate for first-quarter shortfalls and allow “an almost normal tourist season,” Breton said.

Global airline body IATA called on the U.K. Competition and Markets Authority to launch an inquiry into pricing of Covid-19 tests for travel, as separate research showed travelers had to pay twice as much for the PCR tests in Britain as they do in much of Europe, the Guardian reported on Sunday.

While the cheapest U.K. pre-departure PCR tests are available for 60 pounds ($82) -- the subsidized rate for passengers at Gatwick Airport -- most travelers are being charged an average of 128 pounds, more than double the price for much of Europe, according to research from the Association of British Travel Agents and the Airport Operators Association.

Jet2, one of the biggest tour operators in the U.K., postponed all holidays until June 23 citing lack of clarity from the government, the Guardian reported in a separate story. The tour operator said “not knowing when we can start to fly and where we can fly to” led to suspension of flights and holidays.

Russia reported 8,704 new Covid-19 cases in the last 24 hours, down from the 9,150 reported a day earlier as the caseload continues to stabilize. Authorities reported 402 deaths yesterday from the virus, unchanged from the previous day.

India is facing an escalating health crisis, with its second wave of virus infections hitting record highs, overwhelming hospitals around the country as supplies of intensive care beds and vital drugs come under pressure.

Across the South Asian nation, from the wealthiest and also the worst-hit state of Maharashtra to its most populous, Uttar Pradesh, reports are emerging of hospital beds running short and immunization centers turning away people as they run out of vaccines. India reported more than 145,000 new infections Saturday, and with over 13 million virus cases lags behind only the U.S. and Brazil.