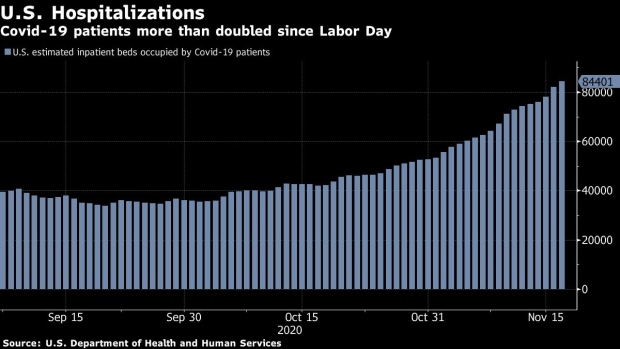 The U.S. Centers for Disease Control and Prevention escalated its warning against traveling on cruise ships to the highest level. Cases and deaths slowed in the U.K. and Italy.

President Donald Trump stayed quiet on sharing U.S.-made vaccines as leaders of the world’s richest countries pushed for equality in the race to vaccinate people against the coronavirus.

Shanghai city reported one new local coronavirus case on Saturday, after testing 15,416 people following two new local cases on Friday. Local authorities said at a press conference Saturday that the two local cases are a married couple - the husband is an airport cargo security inspector and the wife is a nurse. The new confirmed case is a colleague of the husband at the cargo station of Shanghai Pudong International Airport.

Brazil reported 32,622 new cases, at the end of the second straight week of rising infections and fatalities, according to the Health Ministry website. The virus’s spread in Brazil, which has the most cases after the U.S. and India, had been weakening for roughly two months. The nation has more than 6 million cases and almost 170,000 deaths with 376 more reported on Saturday.

President Jair Bolsonaro said at the virtual G-20 summit on Saturday that it was up to each individual to decide whether to be vaccinated, and that the pandemic should not justify any attacks on personal freedom.

Prime Minister Boris Johnson will confirm the end of the national lockdown in England on Dec. 2 and reintroduction of the tier system when he announces the U.K.’s Covid winter plan in Parliament on Monday.

The plan is set to be discussed and signed off by his Cabinet on Sunday, according to an emailed statement from the prime minister’s press office. It will include guidelines for family visits over Christmas, “despite ministers being clear this will not be a normal festive period.”

The rate of growth in infections in the U.K. is slowing, according to latest data. Still, more than 2,800 people have died in the past week and total cases are approaching 1.5 million after surging 50% this month.

The U.S. Centers for Disease Control and Prevention has escalated its warning for cruise travel to the highest level and continued to recommend avoiding any trips on cruise ships worldwide.

The agency raised its warning to Level 4 from Level 3, citing “very high” risk of Covid-19 on cruise ships. Passengers are at increased risk of person-to-person spread of Covid-19 and should get tested and stay home for at least seven days after travel, according to its website.

“For most travelers, cruise ship travel is voluntary and should be rescheduled for a future date,” the CDC said.

New York reported 5,972 cases, the fifth straight day over 5,000 and the most since April, when the state was the nation’s early epicenter of the virus. While cases have risen rapidly in the last several weeks, the state’s overall positive test rate is 2.9%. That is among the lowest in the nation.

Governor Andrew Cuomo has set restrictions on a growing list of “micro-clusters” around New York City and upstate, with positive rates as high as 10%. Overall positivity of those clusters is 4.3%, he said in a press release.

The new cases topped Friday’s record of 13,005 infections, bringing the total to almost 1.1 million. The number of deaths increased by 86 to 18,643, state data showed. The increased patient load left California’s hospitals with just 1,921 intensive-case unit beds available, near the low in July.

A 10 p.m. to 5 a.m. curfew will be imposed in most counties for a month to ease the rate of infection.

Portugal will limit movement between municipalities on Nov. 28-Dec. 1 and Dec. 5-8, two periods that include weekends and national holidays on each following Tuesday.

The number of daily new infections continues to be “worrying,” even if the pace of growth has decelerated, Prime Minister Antonio Costa said at a press conference in Lisbon.

France’s virus cases rose by 17,881 to 2.13 million on Saturday, with the pace of new infections continuing the slowdown of the past two weeks. The seven-day average of new cases fell to 24,636 cases, the lowest in a month and less than half the pace two weeks ago.

The rate of positive tests fell to 14.8%, down 0.2% points from a day earlier and falling from more than 20% in the first week of November. Deaths linked to the virus increased by 253 to 48,518. The seven-day average fell to 610 deaths, compared with a first-wave peak of more than 900 daily deaths in early April.

South Dakota has reported 352 fatalities so far in November, slightly less than just half the state’s total for the entire pandemic. Another 36 deaths were recorded Saturday, the same as the day before, in a state that has imposed no restrictions on the virus’s spread even as it became among the nation’s hardest hit. Rapid City, the second largest city, is embroiled in political fight over whether to pass a mask mandate.

Leaders of the world’s richest countries pushed for equality in the race to vaccinate people against the coronavirus, while President Donald Trump stayed quiet on sharing U.S.-made vaccines with other nations.

The battle to counter the pandemic dominated the first day of a virtual summit of Group of 20 nations on Saturday, hosted by Saudi Arabia.

New York City’s positive Covid-19 test rate remains above the 3% threshold that led to a shutdown of in-person schools on Nov. 19.

The latest seven-day average is 3.11%. The city reported a seven-day average of 1,345 new cases, the highest since May. At the height of the city’s outbreak earlier this year, more than 6,300 people were diagnosed with Covid-19 in one day.

Schools are shut for at least two weeks. Indoor dining and other nonessential, “high-risk” businesses may be shut in early December if the city’s positivity continues to increase, Governor Andrew Cuomo said on Nov. 20.

New Jersey reported a record 4,679 new coronavirus cases, bringing its total to more than 300,000 since the start of the outbreak in March.

Of 21 counties, Essex County in northern New Jersey had the most new cases, 536. But the resurgence is statewide. Camden County, in the southern part of the state, had the second-most new cases, 435.

The U.K. reported fewer than 20,000 new cases for the second time this week. Another 19,875 infections were reported on Saturday, below the average of 22,287 over the previous seven days. Cases have risen 50% this month to almost 1.5 million. The 341 deaths compare with the daily average of 426 this week.

The Rome government sought parliamentary approval for 8 billion euros of extra deficit this year, as Prime Minister Giuseppe Conte battles to shield the fragile economy from a coronavirus resurgence.A cabinet meeting chaired by Conte approved the request to parliament late Friday night. The government also signed off on a third package of aid, worth 1.95 billion euros for 2020, chiefly for shops and businesses hit by a soft lockdown in regions including Lombardy around Milan.

Spain’s campaign to vaccinate its population against Covid-19 will begin in January and will be voluntary, El Confidencial reported, citing Health Minister Salvador Illa.

Spain expects to vaccinate about half its people by May, Illa said. The government plans to reveal further details of its vaccination strategy on Nov. 24.

The U.S. reported 1,870 fatalities on Friday, in a week in which the death rate rapidly rose, according to data compiled by Johns Hopkins University and Bloomberg.

The daily average over the last week is now 1,440, compared with 1,177 the week before. That’s the highest level since last spring, when the outbreak in New York and the northeast pushed fatalities to a daily peak of more than 2,600 in late April.

Poland will allow shopping malls to reopen, while keeping restaurants, cinemas and schools closed as Prime Minister Mateusz Morawiecki asked for patience until a vaccine arrives.

Poland introduced a near-full lockdown earlier this month after infections surged in October, with daily deaths climbing to a record 637 earlier this week. Schools will remain closed until at least mid-January, while gyms, cinemas, theaters and restaurants won’t reopen before Dec. 27.

Morawiecki asked Poles to stay at home for Christmas, adding that the government is working on legal ways to limit travel during that period.

The Iranian government will make monthly payments to almost 30 million people over the next four months to support the economy during the coronavirus outbreak, President Hassan Rouhani said. Iran started a two-week lockdown on Saturday, reducing economic activity to essential services and businesses in many areas.

Hungary reported a record 121 deaths from the coronavirus on Saturday, though the number of hospitalized patients and new infections showed signs of leveling off. Hungarian authorities have been bracing for a further deterioration in the pandemic through mid-December.

The regions of Bavaria, Berlin, Bremen, Hesse, North Rhine-Westphalia and Saxony have posted the highest infection rates recently and the number of Covid-19 patients in intensive care has “risen sharply” since mid-October, the Berlin-based Robert Koch Institute said.

Germany is already in a partial lockdown that has closed museums, bars and restaurants but kept schools and most shops open. That may be extended well into next month as Europe’s biggest economy seeks to regain control over the spread of the coronavirus before people head home for the holidays, Bloomberg News reported on Friday.