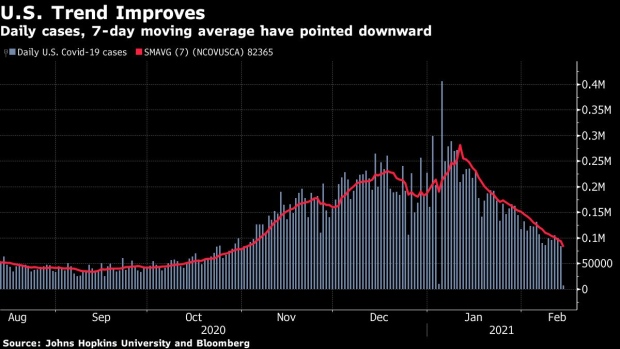 (Bloomberg) -- The U.S. recorded the lowest daily number of new coronavirus infections since Oct. 25, before a holiday season surge sent case numbers soaring. The New York City subway system, meanwhile, is getting closer to resuming its 24-hour service on Feb. 22.

In Europe, U.K. Prime Minister Boris Johnson is hoping to draw up plans to lift national pandemic restrictions on socializing, shopping and traveling to work, including possible target dates for when the curbs will be eased. Germany, though, tightened its borders to halt more infectious variants spreading, prompting Austria’s government to warn against “excessive” steps.

The country signed a contract to buy more Pfizer vaccines for 3 million people and Novavax vaccines for 20 million, according to a statement from Korea Disease Control and Prevention Agency.

Pfizer doses for 500,000 people will be imported within the first quarter, earlier than the planned timeline of the third quarter, with inoculations possibly starting from April.

Harris County in Texas is rushing to distribute thousands of Covid-19 vaccine doses after the county’s public health facility lost power Monday and the back-up generator failed, Rafael Lemaitre, a spokesman for the county said in an email.

Harris County, which includes the city of Houston, was hit by a winter storm that’s causing power outages across the central U.S. and into Mexico.

County officials planned to allocate more than 8,000 doses of Moderna Inc.’s vaccine to places where large groups of people are already present, including medical personnel who could administer the shots. They identified three hospitals, the county jail and Rice University, Lemaitre said.

The U.S. government needs to better coordinate its federally run vaccine programs with state officials, and differentiate how many doses are being deployed by the programs when it reports on the results, the National Governors Association urged Monday.

In an open letter to President Joe Biden, the governors said the federal government administers three separate programs that the states have no control over and little visibility on. Meanwhile, some states are allocating vaccine doses to the same pharmacies as well as the Federally Qualified Health Centers, the letter said.

That can be confusing to the general public and, potentially, cause redundancy and inefficiency, the letter said. “As usual, some pharmacies and FQHCs are better suited for the task than others,” the governors wrote in the letter. “Following the performance data on these entities is essential.”

The New York City subway system is getting closer to resuming its famous 24-hour service on Feb. 22.

The first step will be a shorter overnight shutdown, from 2 a.m. to 4 a.m. instead of 1 a.m. to 5 a.m., said Patrick Foye, chief executive officer of the Metropolitan Transportation Authority, the state agency that runs the subways. The MTA’s stepped-up cleaning practices will continue, officials said.

WHO Clears Astra Vaccine for Emergency Use (1:30 p.m. NY)

The World Health Organization cleared AstraZeneca Plc’s Covid-19 vaccine for emergency use, adding its official approval to a shot that’s expected to speed up inoculations in developing countries.

The WHO validated two versions of the vaccine, produced with SK Bioscience Co. of South Korea and the Serum Institute of India.

The formal approval follows a recommendation by the WHO Strategic Advisory Group of Experts on Immunization to allow the vaccine to be administered to all adults over 18. That guidance differs from the approach taken by some European Union countries that have restricted its use in the elderly, citing insufficient trial data.

U.K. Prime Minister Boris Johnson is hoping to draw up plans to lift national pandemic restrictions on socializing, shopping and traveling to work, including possible target dates for when the curbs will be eased.

“We want this lockdown to be the last,” he said at a news conference from 10 Downing Street on Monday. “We want progress to be cautious but irreversible.”

Johnson has confirmed his priority will be to try to reopen schools from March 8, but no decision has yet been made on whether all age groups will return to classrooms at the same time. He said he will unveil the earliest potential dates for removing restrictions from other sectors, “if we possibly can.”

The European Union may secure an extra 150 million doses of the Covid-19 vaccine produced by Moderna Inc. as the bloc seeks to accelerate inoculations, according to an EU official familiar with the matter.

The deal being arranged by the European Commission would bring to 310 million the total number of vaccine doses from Moderna for EU countries. The deliveries of the additional 150 million doses would be for the third quarter, according to the official, who added that negotiations are quite advanced.

The U.S. recorded 65,336 new infections on Sunday, the lowest daily number since Oct. 25, before a holiday surge sent case numbers soaring, according to data compiled by Johns Hopkins University and Bloomberg.

Decisions about easing will be made in two weeks at the earliest, he said.

Portuguese Prime Minister Antonio Costa was given his first vaccine dose in Lisbon on Monday, the premier’s office said. Some leaders in Western Europe have shied away from getting inoculated, for fear of being accused of jumping the queue. Portugal aims to have 70% of its adult population vaccinated by the end of the summer.

U.K. Prime Minister Boris Johnson will lay out plans to lift curbs, including where possible target dates for when the restrictions will be eased. The premier will detail his “road map” for ending lockdown in a statement on Feb. 22.

“What we want to see is progress that is cautious and irreversible,” Johnson said in a pooled interview with broadcasters. Johnson said his priority remained to reopen schools from March 8.

Travel restrictions at Germany’s border with the Czech Republic risk severing automotive supply lines that could spark a wave of production stoppages, according to Germany’s VDA automaker association. BMW AG and Volkswagen AG operate plants in Bavaria and Saxony that depend on car parts particularly from Czech Republic. Traffic lines appeared at some border crossings, according to local media reports.

From Sunday, only German citizens and residents in the country are allowed to enter Germany from the Czech Republic and Austria’s Tyrol region, two zones where more infectious variants of coronavirus are widespread. Austrian Foreign Minister Alexander Schallenberg cautioned Germany against “excessive” steps.

On Monday, German Chancellor Angela Merkel’s spokesman left open the possibility of further border closures with neighboring countries as a last resort to combat the pandemic.

“We have now decided that a vaccine that has been reworked by the manufacturer on the basis of the previous vaccine to combat new mutations no longer has to go through the entire approval process,” the paper quoted Kyriakides as saying.

Italian health ministry adviser Walter Ricciardi over the weekend called for a new lockdown, citing the rise in virus cases linked to new strains. The government of incoming Prime Minister Mario Draghi was forced to make a last-minute U-turn on the planned opening of ski lifts on Monday throughout the country, ruling that they will remain closed until at least March 5. Politicians in the mountainous north ripped the decision, calling for an immediate shakeup of the country’s health-management team.