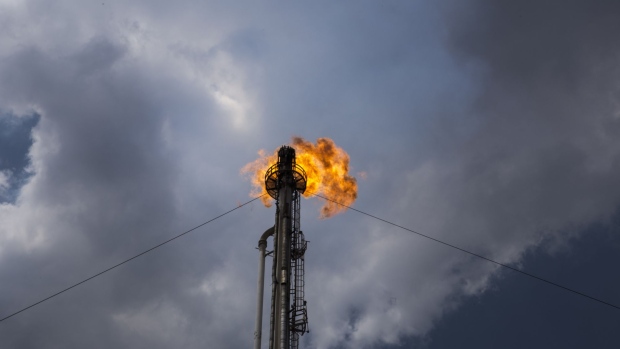 A gas flare stands at the Petroleos Mexicanos (PEMEX) Miguel Hidalgo Refinery in Tula, Hidalgo, Mexico, on Tuesday, April 18, 2017. The $2.1 billion project to develop and operate a coker unit at the Pemex's Tula refinery will turn lower-value fuel into products like gasoline and diesel. , Bloomberg

(Bloomberg) -- U.S. Census Bureau says that data which showed that Mexico imported crude oil in July and August was wrong after the Mexican government denied that the country had imported oil this year, according to an emailed statement from U.S. Census bureau spokeswoman Julie Iriondo in response to questions from Bloomberg.

“After the release of the U.S. International Trade in Goods and Services August 2019 report, the U.S. Census Bureau identified a misreporting of filings of crude oil exports to Mexico and determined that corrections to our data were necessary,” the statement said. “Corrections for July and August have been published in the statistical corrections section of the international trade website.”

The U.S. Census bureau said that “corrections to the data will be applied to all of its data products, such as USA Trade Online and the Census API, before it releases its Annual Revisions report in June 2020.”

U.S. Energy Information Administration data -- compiled by the Census Bureau - had showed that Mexico imported about 533,000 barrels of crude from the U.S. in July. Another 8,962 barrels was shipped in August, U.S. Census data showed before the correction.

Mexico President Andres Manuel Lopez Obrador and Energy Minister Rocio Nahle had denied this week that Mexico had imported crude oil since the arrival of the new government on Dec. 1.

Late last year Pemex imported oil as part of the previous administration’s plan to improve output from its refineries. At the time, then-presidential candidate Lopez Obrador lambasted the decision.

To contact the reporter on this story: Amy Stillman in Mexico City at astillman7@bloomberg.net

To contact the editors responsible for this story: David Marino at dmarino4@bloomberg.net, Carlos Manuel Rodriguez