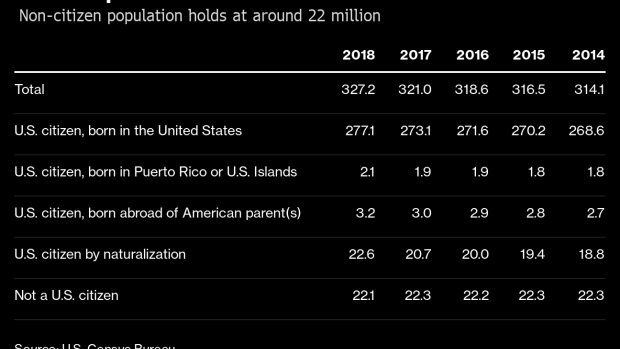 A demonstrator holds a sign that reads "Everyone Counts" outside the U.S. Supreme Court in Washington, D.C., U.S., on Thursday, June 27, 2019. The Supreme Court issued a mixed decision on the Trump administration's bid to add a citizenship question to the 2020 census, saying the Commerce Department's explanation for adding the question was inadequate. Photographer: Andrew Harrer/Bloomberg , Bloomberg

(Bloomberg) -- The percentage of foreign-born U.S. residents has reached its highest level in more than a century, according to estimates from the 2018 American Community Survey released today.

A record 44.7 million people are foreign-born, or about 13.7% of the U.S. population. That’s the highest rate since 1910 and comes amid a highly-charged political debate over whether the decennial Census survey should include a citizenship question.

While the idea of adding a citizenship question to the decennial Census survey has been a contentious issue, the annual ACS, compiled by the U.S. Census Bureau, does ask about a person’s place of birth, citizenship and year of entry into the U.S. The data is compiled to estimate the foreign-born U.S. population.

This is how the questions appear in the survey:

To contact the editors responsible for this story: Brad Skillman at bskillman1@bloomberg.net, Chris Middleton