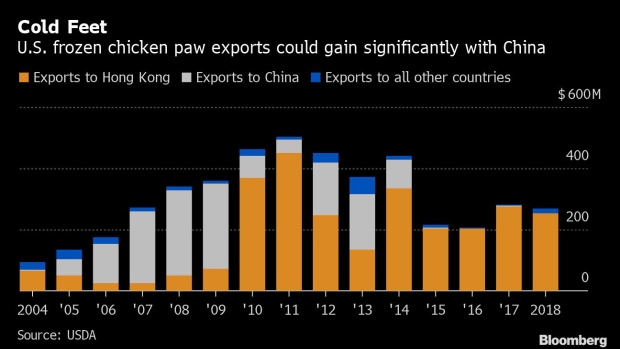 (Bloomberg) -- A container with 23.94 tons of American chicken feet cleared Chinese customs Tuesday, potentially heralding the start of a new trading era between the two countries just days before they sign a long-awaited trade deal.

The chicken feet, or phoenix claws as they’re known in Chinese recipes, were inspected and approved for unloading by customs in Shanghai, the official Securities Times reported. The event marks the return of U.S. poultry meat to China five years after it was banned, it said.

China prohibited the import of all U.S. poultry products in 2015 in response to cases of avian flu in America. That stance changed last year as demand for alternative animal protein surged after the spread of deadly African swine fever slashed the country’s hog herds and reduced pork supplies.

The Asian nation is expected to increase purchases of American farm products after signing the trade deal on Wednesday in Washington, which may include a pledge to buy $40 billion a year of agricultural goods. U.S. chicken giant Sanderson Farms Inc. said last month it sent its first container of chicken feet, also known as paws, to China.

Chicken feet are popular in traditional regional Chinese cooking and are served as snacks to go with alcohol, in cold dishes, in soups or as the main dish. They are typically steamed first to make them puffy before being stewed and simmered in abalone sauce.

To contact the editors responsible for this story: Alexander Kwiatkowski at akwiatkowsk2@bloomberg.net, James Poole, Anna Kitanaka