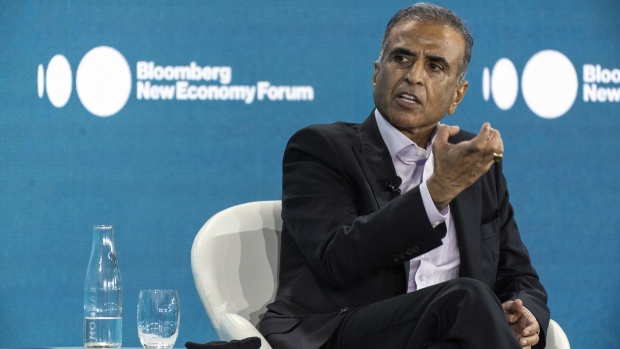 (Bloomberg) -- Early signs of thawing relations between the U.S. and China dominated discussions on the opening day of the Bloomberg New Economy Forum in Singapore, just a day after leaders of the world’s two biggest economies held their first virtual summit.

In a hint of China’s willingess to engage, Vice President Wang Qishan -- technically second-in-charge to President Xi Jinping -- said his country cannot develop in isolation from the rest of the world and repeated a pledge to welcome foreign investment.

Speaking shortly after, former U.S. Secretary of State Henry Kissinger described the dialogue between U.S. President Joe Biden and Xi as a “good beginning” to avoid a conflict.

“They now have to be followed by concrete discussions that lead in a direction both presidents have affirmed they want to pursue,” the influential U.S. diplomat and author said via video in a conversation with Bloomberg Editor-in-Chief John Micklethwait.

More from the New Economy Forum

It was at the New Economy Forum in 2019 that Kissinger first warned relations between the two big powers were in the “foothills of a Cold War.”

This week’s dialogue between the two leaders means  “we’re through the mountain pass, on a precipice from which you can look in both directions,” Kissinger said. “And now it depends which direction is chosen.”

In his remarks, Wang repeated a pledge that China will embrace more foreign investment and he urged the world to work together to boost economic growth.

“China can not develop in isolation of the world and nor can the world develop without China,” Wang said. “China will not waver in its resolve to deepen reform and expand opening up.”

Even amid tensions between both superpowers, a top executive from the New York Stock Exchange said there’s appetite for Chinese company listings once both governments resolve a stalemate over regulatory scrutiny.

The bourse needs to strike a balance between investor protection and access to opportunity to fast-growing companies, NYSE President Stacey Cunningham said at the Forum.

Still, for all the conciliatory-sounding rhetoric, underlying tensions between the two powers were also evident as U.S. Commerce Secretary Gina Raimondo spoke of U.S. plans to initiate a new economic framework for the Indo-Pacific in 2022 as the Biden administration aims to reinvigorate America’s standing in the region.

“We’re likely to launch a more formal process in the beginning of next year which will culminate in a proper economic framework” in Asia, Raimondo said at the Forum. “I am here in the region beginning the discussions, laying the groundwork.”

While it’s clear that many people in the region want the U.S. to rejoin the Comprehensive and Progressive Agreement for Trans-Pacific Partnership, she said, “for various reasons that is not going to happen now.”

Biden has pledged to step up U.S. engagement in Asia after years of ceding influence to China. Yet the administration has also been accused of lacking an economic vision for the region nearly five years after Donald Trump withdrew from an 11-nation Pacific trade deal.

“This is my first conference in more than two years,” said Le Thi Thu Thuy, Vice Chairwoman of Vietnamese conglomerate Vingroup JSC. “It’s good to know where your passport is and getting yourself together” to network again.

Here are some of the other issues that are top of mind for executives at the Forum.

In discussions about how Covid is reshaping the world economy, executives warned of sticky inflation and super charged technological disruption.

“Let’s remember inflation is at a 31-year high, at least the data that came out of the U.S., and it’s clearly going to remain high for the foreseeable future,” he said.

Later in the day, Goldman Sachs’s David Solomon warned that markets could face a rocky time ahead as the global economy seeks to emerge from the abrupt impact of the pandemic.

“When I step back and think about my 40 year career, there have been periods of time when greed has far outpaced fear -- we are in one of those periods of time,” Solomon said. “My experience says those periods aren’t long lived. Something will rebalance it and bring a little bit more perspective.”

The world has “completely pivoted” to the need to tackle climate change, according to Sunil Mittal, the billionaire chairman of Bharti Airtel Ltd. Speaking at the Forum, Mittal said he would fly back to a Delhi that is “covered in smog.”

“We can’t live like this,” Mittal said. “We talk about 5 million people dying of the pandemic; we don’t talk about how many people have been choked around the world.”

The phenomenon of workers looking for job changes to better their prospects has been exacerbated by the pandemic and will remain for some time, according to Mastercard Inc. Chief Executive Officer Michael Miebach.

In industries that are in great demand, such as hospitality and health care, there is “a lot of competition for great people,” Miebach said. “In our industry, anybody who knows anything about AI, digital identity, cyber, hot skills, those are the people that are in demand and those are the people saying ‘I am feeling huge pressure everyday in what I do, can I do better, let me look elsewhere.’”

Weber also said he is “skeptical” of cryptocurrencies, in one of his strongest verdicts yet on digital currencies. The idea of moving “payments from banks and cash to something that is an anonymous vehicle where both sides of the transactions are not known -- that will not survive,” he said at the forum. Regulators will also not tolerate cryptocurrencies becoming “really big” given the unidentifiable nature of transactions, said Weber, a former head of Germany’s Bundesbank.

In a vivid reminder that the pandemic isn’t over, Tanzania’s government used the forum to call for more support from the developed world with more sharing of screening, testing and vaccine technologies, and more aid from the multilateral lenders.

“We ask the advanced world not to forget sub-Saharan Africa because the challenge that we see is while advanced economies are recovering relatively faster because they have the vaccines, we don’t have the vaccines,” vice president Philip Isdor Mpango said. “The facilities that have been available to us are just too little. And the pandemic is global.”

On the same panel, Singapore Senior Minister Tharman Shanmugaratnam noted 80% of Sub-Saharan Africa and South Asia lacks Internet access. “How do we improve Internet access, how do we get learning inclusion, how do we raise standards, how do we have financial inclusion and access to credit for SMEs?” he asked. “Those are the big challenges of the world, not so much the incremental changes in costs of cross border payments and stuff.”

On technological change, Kissinger -- the renowned diplomat who paved the way for President Richard Nixon’s historic 1972 trip to China -- cautioned that the U.S. and China should find ways to cooperate on advanced technology like artificial intelligence, saying a race could lead to accidents.

“The logic of cyberwarfare is to operate at a speed which is beyond human capacity, and therefore the temptation is to build automatic responses into weapon systems,” Kissinger said. “But if you deprive these issues of any human element, then the danger that systems might make a judgment which you didn’t foresee, and the danger of an automatic conflagration, becomes very grave.”

Alphabet’s Pichai acknowledged that Google is “neck to neck” with Chinese companies in AI and quantum computing, but argued that the U.S. and China have room to collaborate in areas like climate change and AI safety.