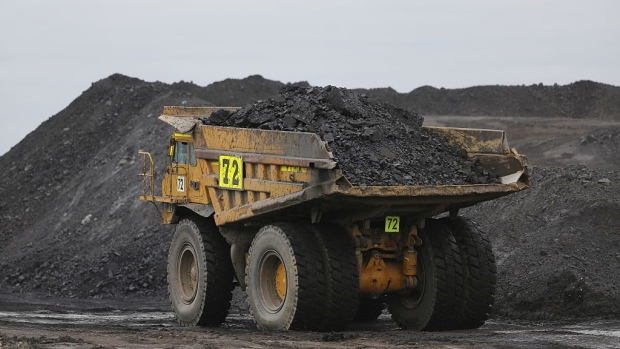 A dump truck carries a load of coal on a haulage road at the Peabody Energy Somerville Central mine in Oakland City, Indiana, U.S., on Wednesday, April 6, 2016. Peabody filed for bankruptcy on Wednesday, the most powerful convulsion yet in an industry that's still waiting for the coal market to bottom out. , Photographer: Bloomberg/Bloomberg

There isn’t much that Senate Minority Leader Mitch McConnell and the Sierra Club agree on, but one of those rare things is a measure that’s part of the bipartisan infrastructure package to be considered by the U.S. House of Representatives later this month that would fund $11.3 billion to remediate coal mines abandoned before 1977.

It’s essentially a taxpayer subsidy of a polluting industry and yet it has plenty of support on both sides of the political aisle.

Coal’s harm is well known, and bipartisan consensus arose for reasons both environmental and economic. Abandoned mines pose both a physical danger as well as a climate threat. They leak copious amounts of methane — a greenhouse gas 80 times as potent as carbon dioxide over its first 20 years. And fixing those myriad problems creates jobs for small businesses — particularly in former coal states like, yes, Kentucky, which McConnell represents.

Still, it wasn’t supposed to be this way: The coal industry was legally obligated to pay this bill.

For over a century, miners drilled holes in the ground, and when they were done extracting the coal, they would walk away. This had bad consequences: Open pits and collapsing walls are physical hazards, and underground fires and acidic drainage into streams are environmental nightmares

In 1977, Congress passed the Surface Mining Control and Reclamation Act to address the mess. Part one was a fee on coal production to clean up mines abandoned before that year. Part two mandated that companies promise to clean up before they could even start drilling a new mine. To ensure this, they had to bond — essentially put up a promise of assets as a guarantee that they wouldn’t walk away.

In the interim years,  industry fees have been used to ameliorate roughly $6 billion of the pre-1977 mine damage with measures from filling in holes in the ground to setting up systems to reduce acid-rain runoff. But there is at least $20 billion in remediation to be done, according to an April study by the Ohio River Valley Institute, a nonprofit that follows stranded assets from the oil and coal industry.

Rebecca Shelton at the Appalachian Citizens Law Center in Whitesburg, Kentucky, explains that there are two causes for the shortfall in funds. The first is that the industry is declining so there is less business to tax every year. The second is that the fee was never enough in the first place.

“It was a compromise between folks saying, ‘The industry does need to be held accountable for this, because they are continuing to profit off of this mineral resource’ and the current industry, who say ‘It wasn't our company that created that mess,’” Shelton said.

So if the fee for the mines abandoned before 1977 wasn’t enough, what about the guarantees to clean up mines drilled since? Well, those aren’t so reliable either. “There are a lot of different kinds of bonds that companies are allowed to use in order to kind of ensure their reclamation responsibilities,” says Shelton, “but we already know that mostly they are inadequate.”

Ashley Burke, a spokeswoman for the National Mining Association, disputes that assessment, saying the industry is already overburdened. “Coal companies are paying twice for mine cleanup,” she wrote in an email. “They are paying for legacy mine issues dating prior to 1977 and they paying to ensure today’s operations are reclaimed.”

She also cast doubt on whether the fees were being put to good use. According to the Office of Surface Mining and Reclamation and Enforcement, almost $12 billion of fees have been collected, with only half being distributed to states and tribes for reclamation. The rest either hasn’t been allocated, was given to miners’ unions for health expenses, or has been used to cover the agency’s own operating expenses.

There are already signs that we are headed for further trouble. In some states, many coal companies were allowed to assure their own bonds. That turns out to be a huge loophole when a company is going to go out of business and doesn’t have the assets it claimed, say, 30 years ago when it signed the bond.

Shelton says her group and their allies are working hard now to get tougher bonding rules for the industry, but most of their efforts have failed. Another multibillion dollar bailout may be inevitable down the line.