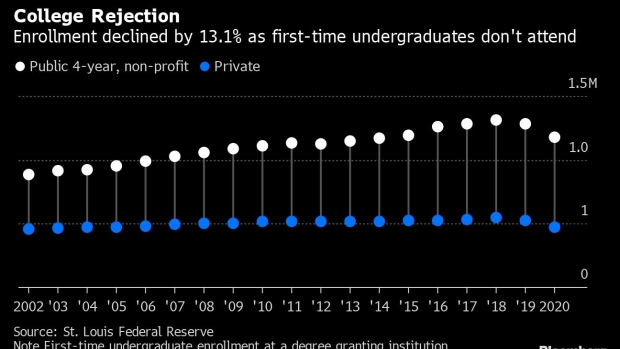 (Bloomberg) -- U.S. college enrollment of first-time undergraduates declined at the fastest pace in decades last year, according to research published Monday by the Federal Reserve Bank of St. Louis.

In a blog posting, the St. Louis Fed said freshman enrollment plunged 13.1% in the fall of 2020 and that college enrollment overall was down almost 3%.

“This is especially noteworthy because, in a typical recession, enrollment tends to rise as job prospects (and, consequently, the opportunity costs of college) fall,” wrote authors Oksana Leukhina and Devin Werner.

Perceived benefits from the “hallowed college experience” and the perceived decline in value as classes moved on-line pushed attendance lower, the researchers said. The benefit-to-cost ratio likely pushed some college consumers to hesitate as well.

While some colleges have reduced tuition costs to lure students in the middle of a pandemic, college students have had to reassess plans. A survey by the Census Bureau found that around 80% of households in which at least one adult was considering taking post-secondary classes, plans have either been canceled or changed in some significant way.

Returning undergraduate enrollment declined by a much smaller 1.6%. Meanwhile, graduate student enrollment increase by 3.6%, the most since 2009, as recent graduates opted to stay in school in the hope that by the time they finish the economy will have improved.