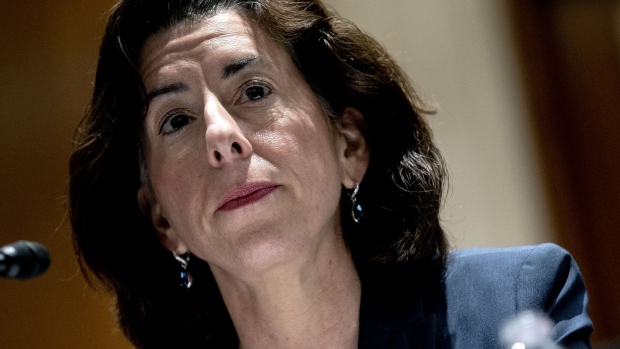 Gina Raimondo, U.S. commerce secretary, listens during a Senate Appropriations Subcommittee hearing in Washington, D.C., U.S., on Wednesday, May 26, 2021. Raimondo said she wants to find a "long-term solution" to Washingtons long-running dispute with Canada over lumber, the cost of which has soared to records. , Bloomberg

“There still aren’t a lot of signs of persistent long-term inflation,” Raimondo said in an interview Wednesday with Bloomberg editors and reporters in Washington. She said more than 70% of the recent price increases are in product categories directly related to the pandemic, with higher car prices, for example, owing to a shortage in computer chips.

Raimondo said the administration monitors inflation “constantly’ and takes it “seriously.” While prices are rising and that’s “significant,” she said, “we believe it’s temporary.”

Prices paid by U.S. consumers surged in June by the most since 2008, topping all forecasts and testing the Federal Reserve’s commitment to sticking with ultra-easy monetary support for the economy.

The White House has recently been shifting the way it talks about inflation, as polls show increasing voter concern and Republicans try to use rising prices to stall President Joe Biden’s sweeping plans to spend trillions of dollars on social programs and infrastructure projects.

She said such investment will actually boost productivity, which helps hold down inflation, and also said business leaders often tell her that the nation needs to upgrade poor infrastructure such as airports and invest in workers’ skills.