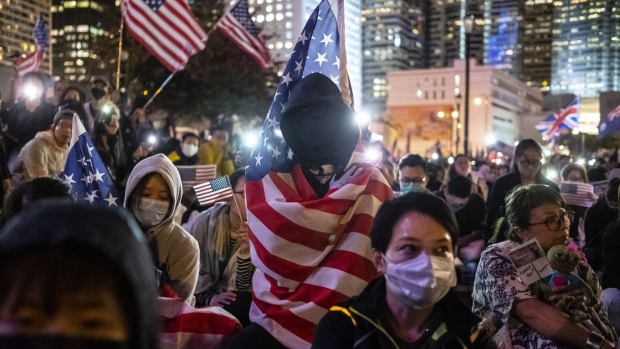 A demonstrator wrapped in a U.S. national flag sits with others during the "Thanksgiving Day Assembly for Hong Kong Human Rights and Democracy Act" at Edinburgh Place in the Central district of Hong Kong, China, on Thursday, Nov. 28, 2019. Donald Trump signed legislation expressing U.S. support for Hong Kong protesters, prompting China to threaten retaliation just as the two nations get close to signing a phase one trade deal. Photographer: Chan Long Hei/Bloomberg , Bloomberg

(Bloomberg) -- The U.S. condemns Hong Kong’s decision to postpone its Legislative Council elections by a year and urges the city’s government to reconsider, Secretary of State Michael Pompeo said in a statement.

“There is no valid reason for such a lengthy delay,” Pompeo said. “This regrettable action confirms that Beijing has no intention of upholding the commitments it made to the Hong Kong people and the United Kingdom under the Sino-British Joint Declaration, a UN-registered treaty, and the Basic Law.”

Pompeo said Hong Kong authorities should hold the elections as close as possible to Sept. 6, the date on which they were originally scheduled.