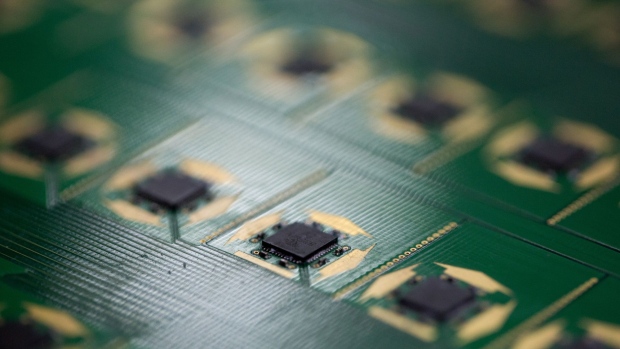 (Bloomberg) -- The Trump administration is considering new restrictions on exports of cutting-edge technology to China in a push aimed at limiting Chinese progress in developing its own passenger jets and clamping down further on tech giant Huawei’s access to vital semiconductors, according to four people familiar with the discussions.

Senior officials are expected to decide by the end of this month whether to block exports of jet engines made by a General Electric Co. joint venture with France’s Safran to China for use in the Commercial Aircraft Corporation of China’s C919 single-aisle passenger jet now undergoing flight tests, three of the people familiar with the discussions said.At the same time, the administration is also considering separate measures to broaden export controls related to the Trump administration’s restrictions on Huawei Technologies Co. by blocking foreign chipmakers, such as Taiwan’s TSMC and U.S. suppliers, from selling components made overseas to Huawei, according to some of the people.

Both moves come as some within the Trump administration are pushing for more aggressive efforts to limit China’s technological rise and to contain what they see as a potential national security threats or rivals to U.S. innovative power in the 21st century. That effort so far has been focused largely on Huawei but has led to broader fears of a new technological Cold War splintering the global tech industry.The steps being considered face debate within the administration and would ultimately need the president’s approval. A representative for the White House declined to comment. But the discussions illustrate the sometimes dueling priorities inside the U.S. government on China.

Even as the moves are being contemplated, President Donald Trump is touting a Chinese commitment to buy an additional $200 billion over the next two years in American farm exports, manufactured products and energy as part of a “phase one” deal that went into effect on Friday.

Some analysts and industry experts say that a short-term effort to clamp down on China’s access to technology could have long-term consequences for vital U.S. export industries like the aviation and semiconductor sectors.

“What the administration seems to fail to understand is that U.S. advanced technology companies need global scale to succeed, whether in engines, chips or other advanced technologies,” said Rob Atkinson, president of the Information Technology and Innovation Foundation, a think-tank. “Cutting off exports works against that goal, and will limit U.S. innovation.”

Both of the new measures, which were first reported by the Wall Street Journal, are expected to be decided on at a meeting of cabinet-level officials Feb. 28, according to the four people familiar with the discussions. A meeting of lower-level officials is planned for Thursday of this week, they said.

The discussions over banning the sale of the GE/Safran Leap 1C engine to China is based on fears that it could help Chinese companies reverse engineer the technology used and speed up the development of their own jet engine programs. But the engine has been approved for sale to China multiple times since 2014 and a dozen of the engines have already been shipped to Comac, according to some of the people familiar with the situation.In a statement, GE, which is lobbying heavily against being blocked out of what it sees as a promising new market, said that it had decades of experience selling products internationally. “We aggressively protect and defend our intellectual property and work closely with the U.S. government to fulfill our responsibilities and shared security and economic interests,” a spokesperson for the company said in an emailed statement.The Commerce Department, which is considering the new GE restrictions, declined to comment on the state of those discussions.The new measures aimed at Huawei are part of a broader administration campaign to both limit its rise and convince allies not to use its equipment in new fifth-generation communications networks, an effort that heated up again at a weekend security conference in Munich.

Read more: Huawei Rift Between U.S. and Europe an Issue for NATOHuawei, which has faced long-standing U.S. accusations of being a conduit for Chinese espionage efforts, was placed on a Commerce Department black list last year that effectively bans U.S. suppliers from doing business with it. In a related development, the company was last week charged with racketeering by the Department of Justice in connection with its alleged theft of U.S. intellectual property. Huawei called the charges “unfounded and unfair.”The administration is now considering closing a loophole that allows U.S. companies to use overseas production facilities to sell materials with less than 25% U.S. content by lowering that limit to 10%. It is also discussing changing something known as the “foreign direct product rule” to further restrict Huawei’s access to products based on U.S. technology manufactured overseas by non-U.S. companies.Among the discussions related to the latter move has been extending a ban on doing business with Huawei to any semiconductor plant using U.S.-made chip-making equipment, according to some of the people familiar with the discussions. But one person close to the debate said the talks related to a ban on sales that in any way touched U.S.-made chip-making equipment were not as advanced as other steps.The Commerce Department, which is leading the discussions, declined to comment on any details. In an emailed statement, a spokesperson said it was continuing a review of individual applications to do business with Huawei and that staff-level discussions related to Huawei where there was any disagreement were being kicked up to the “Secretarial level” to balance national security considerations against corporate commercial interests.“The U.S. continues to have major concerns about Huawei,” the spokesperson said.

Derek Scissors, an expert on U.S.-China economic ties who has advised the Trump administration in the past, said the discussions about broadening the crackdown on Huawei’s access to U.S. semiconductors made sense given the larger concerns about Chinese theft of U.S. technology and the broader economic rivalry.

But he said he had doubts that either a ban on the GE engine sales or moves to extend the Huawei battle to chipmaking equipment would ever come into force.“Most of the administration does not want to take any action,” Scissors said. “They float these discussions all the time.”

To contact the editors responsible for this story: Simon Kennedy at skennedy4@bloomberg.net, Vince Golle, Margaret Collins