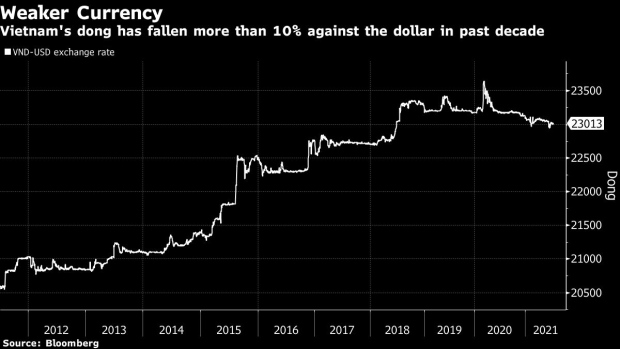 (Bloomberg) -- The U.S. is discussing whether to move toward imposing tariffs on Vietnam over currency actions that during the Trump era were labeled as unreasonable and restrictive to American businesses.

President Joe Biden’s administration plans a meeting on the topic as soon as Wednesday, according to people familiar with the matter, who asked not to be identified because the discussions are private. Participants will include officials from the Treasury Department, the U.S. Trade Representative’s office, Commerce Department and National Security Council, they said.

The planning comes ahead of an October deadline, one year following the start of a government probe, for the U.S. to impose tariffs under section 301 of the 1974 Trade Act.

During the closing days of President Donald Trump’s administration in January, the U.S. labeled Vietnam’s currency actions unreasonable and restrictive to American businesses, but refrained from hitting the nation with punitive tariffs.

The trade investigation remains open, however, and if the U.S. decides to formally propose levies on goods imported from Vietnam, it would need to allow time for public comments and hearings. That means that the initial step of publishing a proposed product list would need to happen in the next several weeks, according to trade experts.

Adam Hodge, a spokesman for USTR, declined to comment beyond saying that the agency’s probe of Vietnam’s currency practices is ongoing. A Treasury spokeswoman declined to comment. The Commerce Department, the National Security Council and Vietnam’s Ministry of Foreign Affairs didn’t respond to requests for comment.

The Biden administration has so far taken a softer approach on currency issues than its predecessor. In December, Trump’s Treasury Department separately tagged Vietnam, along with Switzerland, with the currency-manipulator label. Then Biden’s Treasury in April dropped the designation, even as Vietnam, Switzerland and Taiwan met thresholds for the label.

The Treasury said there was “insufficient evidence” to conclude that the three trading partners showed the intent of “preventing effective balance of payments adjustments or gaining unfair competitive advantage in international trade” to apply the tag.

Also, the April report said that the U.S. Treasury early this year “commenced enhanced bilateral engagement with Vietnam,” including helping the Vietnamese government create a plan to address its undervalued currency and external surpluses. The U.S. is still applying pressure on Vietnam to allow the dong to appreciate, according to people familiar with the matter.

The U.S. is Vietnam’s biggest export market, with the value of shipments doubling over the past five years. But the Southeast Asian country has seen a widening trade deficit with the U.S. that made it a target for Trump; this year it has the third-largest merchandise gap with America behind China and Mexico.

Any punitive tariffs would risk straining relations between the budding security partners, which have strengthened ties in recent years to counter China’s growing economic and military might. In 2016 the U.S. lifted a longstanding ban on lethal arms sales to Vietnam, and the two countries have taken a common stance on opposing China’s expansive territorial claims in the South China Sea.

The Trump administration had also used a so-called 301 investigation against China to apply tariffs on billions of dollars worth of imports that initiated the trade war between the world’s two biggest economies.