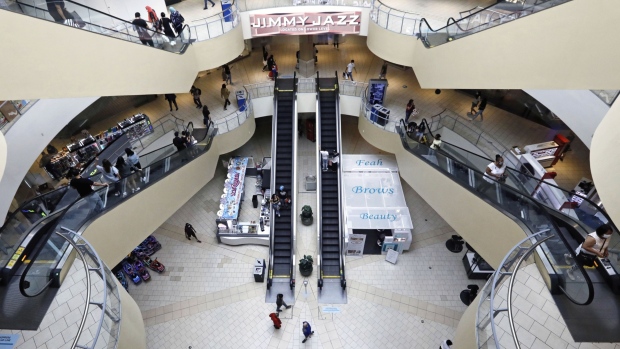 Shoppers walk through the Queens Center shopping mall in the Queens borough of New York, U.S., on Wednesday, Sept. 9, 2020. New York City malls have the green light to reopen Wednesday under the condition that they have enhanced air filtration systems in place. , Photographer: Peter Foley/Bloomberg

A weekly measure of U.S. consumer confidence fell to a seven-week low on significant declines in attitudes toward the economy and buying climate -- just about two weeks before the presidential election.

The Bloomberg Consumer Comfort Index fell 1.6 points to 46.6 last week, data released Thursday showed. Americans’ optimism about their personal finances declined 1.3 points to 60.3, its lowest point since August, while a measure of comfort in the buying climate decreased 2.1 points. Such a decline means that American’s may be growing cautious about their spending.

A measure of confidence in the economy dropped 1.5 points from its six-month high in the prior week. This was the seventh consecutive month where four in 10 Americans or more said the economy is getting worse, the longest since a two-year streak during the Great Recession.

The Bloomberg monthly economic expectations index rose to a seven-month high of 43 in October, as a smaller share of respondents said the economy was getting worse.

Expectations of the economy are largely partisan ahead of the election. Among Democrats, 60 per cent say the economy is getting worse compared to 39 per cent of independents and 22 per cent of Republicans.